Some people take the time to do things right, and some are a little bit too busy.  Charities ask for items that can be auctioned during fundraisers all the time, and it makes people in control of those assets good when they are able to give.

If only the charities were as detail oriented when they send their letter of thanks.  There are times the retailers have to do a little heavy lifting to give, and to receive an indifferent form letter in return is an insult to that effort.

Okay, I’m a little nuts about this stuff.  When I worked at WIBC and a letter went out from my desk to 1,400 school corporations, businesses, and daycare centers, I signed every damn one of them.  It took hours, but I refused to send a letter with a preprinted signature.

When I send a note thanking someone for something, I write it by hand.

My son and I grabbed some lunch to-go at The Ram Restaurant just off State Road 37 in Fishers today, and as we waited for our order, Ryan noticed the six or seven letters of thanks hanging on a bulletin board in the entry.  He was disappointed by the shoddiness of all but two of the letters.

As usual, he was right.

Here are two that did it right: 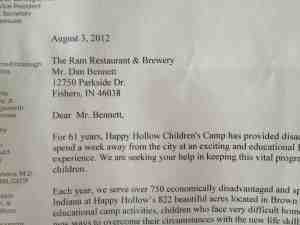 The charity sending this one either had the decency to address it personally or set up a letter format that would automatically format the salutation from the return address line with the name. 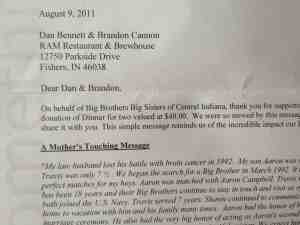 This is even better.  “Dear Dan and Brandon” is friendly in the measure a thank you note should be.

If I had ponied up some auction items, this would be a letter that I would be pleased with.

Here are some that rank from indifferent  to downright rude.  By the way, no one donates because they love receiving a thank you note.  They do it because it makes them feel good to help.  My primary complaint is that the very people whose ability to help is directly determined by donations from good people aren’t valued at the level to rate a decent thank you. 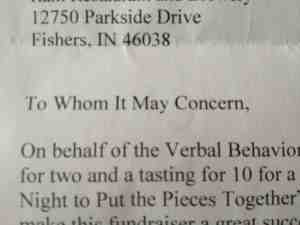 “To Whom It May Concern”?  Yeah, it concerns me. 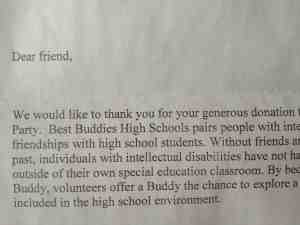 “Dear friend”  I don’t think so.  My friends know my name.  Plus, the giant gap between the salutation and body shows a complete lack of attention to detail.

If this letter reflects how the charity handles their money, and provides assistance, they can bang on other doors when fundraisers roll around next year. 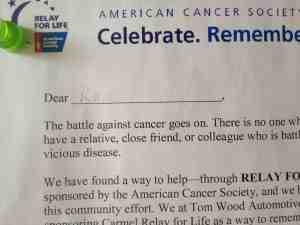 The nightmare salutation of the bunch.  “Dear _______,” with Ram handwritten above the line is just awful.

That this comes from the American Cancer Society is a miserable fact.  There is no way they should condone this kind of horror show of bad manners.

The line is terrible, but writing Ram instead of the contact person’s name is especially heinous.

Every document that goes out on company letterhead should be constructed to represent it – because it does.  And when people wait for their take out, they have nothing better to do than evaluate them.