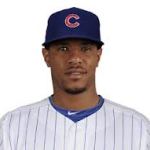 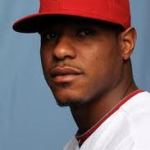 at their roster, and had no idea where the Cubs would find a workhorse to eat innings.  Matt Garza couldn’t be counted on because of his elbow, and free agent acquisition Scott Baker was still rehabbing after April, 2012, Tommy John surgery.  The farm system didn’t have an arm that was ready to be trusted.

Panic set in.  The Cubs rotation would be Jeff Samardzija, Carlos Villanueva, Travis Wood, Scott Feldman, and Uh-oh – no Uh-oh isn’t an import from Korea.  It’s an open spot without any real hope for finding an in-house option.  So, on January 2nd, the Cubs did what the Cubs general managers have always done. 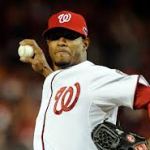 They succumbed to the pressure and picked up the phone.  On the other end was a guy who eats innings, 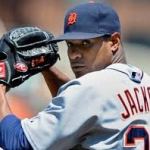 but has shown himself incapable of breaking free of mediocrity over ten seasons for seven teams.  His 70-71 career record testified loudly to that.  Edwin Jackson was interested in pitching for the Cubs, but was tired of moving around.

Traded five times (actually six, but he was traded to the Toronto Blue Jays only to be relayed over to the St. Louis Cardinals on the same day) from 2006 to 2011, and fresh off a one-year deal with the Washington Nationals, Jackson wanted to sign more than a six-month lease. 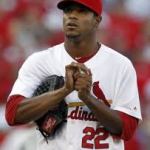 So the Cubs did what the Cubs always do, locked themselves into a long-term deal for a middling talent

who fills a temporary need.

There is a reason Jackson was signed to a one-year deal by the nationals after being a contributor to the Cardinals World Series win in 2011.  He is a stop gap guy who won’t pitch a good team out of the postseason, or a bad team into it.  And now he’ll plug a gap for the Cubs for the 2013 season, and the next three for $13 million per year.

He’ll win at a slightly lower rate than the team, throw between 200 innings give or take.  By the end of the

deal, the Cubs will regret allocating $52 million to signing Jackson.  But for 2013, who else could have taken 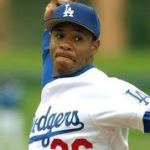 the ball every five days.

After Jackson’s 0-5 start, Hoyer told the Chicago Sun-Times, ‘‘[Jackson] has had a really long track record, and consistency has been one of his traits over his career. At the same time, he needs to pitch better and help his team, and he knows it.’’

Yes, he has been consistently mediocre, and Jackson will win some games, but not as many as he loses if the Cubs are as bad as the appear to be.  Jackson is a professional inning eater, and there is a place on any team for a guy like that.  To prove it, he’s worn eight jerseys prior to turning 30.  He’ll stop there for awhile because there are 29 teams in baseball who don’t want Jackson’s contract.

When the alternative is Casey Coleman, Edwin Jackson at $13M isn’t a bad alternative, but by 2015 that money will be needed elsewhere, and the Cubs will be stuck with an older version of a guy they signed because of a well-earned panic attack.