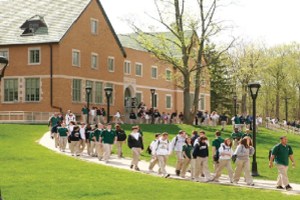 Cathedral High School is the best decision my son ever made. It would sure beat a school with trailers dressed as classrooms.

When I moved to Fishers, Indiana, in 1994, there were roughly 18,000 people who lived here.  It was a strange little town that sprawled over a fairly enormous footprint of 35 square miles.  Now, there are nearly 20,000 students enrolled in Hamilton Southeastern Schools, and a total population of 80,000.

The schools that service the town have multiplied and grown.  A new high school was built less than a decade ago.  Now, the boobs running the place have their hands out again to build additions to the two high schools.  They want $95 million, and the result of a today’s referendum will determine whether they get it.

I voted no, as I usually do when politicians ask for cash because they didn’t have the foresight to understand that continued growth was inevitable.  To require that kind of cash to build additional wings to a school that went online less than 10 years ago is evidence of civic malfeasance, and I don’t play that.

Kids deserve a great education, or at least the opportunity for one.  As Fishers exploded while my son was in junior high, I began asking questions about the new high school.  I didn’t want him to start in one and finish in another.  We made a commitment to Ryan that we would see his education through without upheaval.  My family moved when I was a kid, and changing schools is a distraction, and I was not interested in putting Ryan through that.  The questions were answered, contradicted, then confirmed again, and finally I stopped asking questions.

Ryan decided to attend Cathedral High School, and we wrote checks in addition to our property taxes to pay tuition.  We didn’t do that because we wanted to squander cash we barely had.  It was because of a decided lack of confidence in the knuckleheads running the school corporation.  By all measurements, teachers at Hamilton Southeastern Schools do a fine job of preparing kids for college, but I have little confidence in bureaucrats – especially those who seemed genuinely confused over the direction of the schools I trusted to nurture Ryan’s intellect.

If the referendum is defeated, schools will add trailers to handle the overflow.  That’s not ideal, and I wish it wouldn’t be necessary.  If kids learned better in a trailer, high schools would look like huge trailer parks.  It’s the price for short-sightedness.

The administrators who approved the design for the second high school should be held accountable for not grasping the concept that growth doesn’t stop.  Students deserve better than the leadership shown by Hamilton Southeastern Schools.  Just as voters went to the polls today, they should go again when the town council is up for re-election.

Ryan’s decision to attend Cathedral was excellent, and we never regretted writing a single check to help Ryan prepare for his future. He has worked there through this school year after being a Basketball Coaches Association All-something or other at Loyola while he waits to go to law school in the Fall.  He’s having as good a time as the sports information director, assistant basketball coach, and substitute teacher.

Wondering whether a son or daughter will be in a school or a trailer because of poor planning by bureaucrats makes Cathedral look pretty good.  Even if there was no doubt about the expansion, Cathedral is a wonderful school run by really smart people.  Hamilton Southeastern?  Whether or not the referendum passes, you can bet they’ll be back for more cash in a couple of years to fund another short-sighted plan.