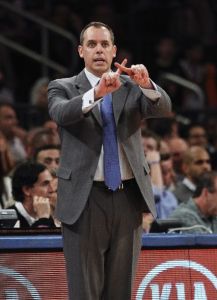 Actually, the Indiana Pacers dropped two deuces, two triples, and three free throws in the fourth quarter, more specifically the last 4:48 of the fourth.  Until that point, they were scoreless in the quarter.

From the time that Jeff Pendergraph reported at 3:04 left in the third for one of the more incompetent 1:14 of basketball in the history of the NBA until Pacers coach gave up all hope of returning to Indianapolis up 2-0, the Pacers went from scaring the hell out of the Knicks while ahead 64-62 to being on the business end of a New York ass-whupping 90-66 with 6:01 left.

To fault Pendergraph as the reason for the loss would be cruel and mostly incorrect.  After all, when he went to the bench, the Pacers were only down 67-64, but his two fouls, poor help defense, and one turnover sure didn’t help.

The Knicks did what teams do when their backs are against a wall – defend with passion.  They extended, impeded, and exploited.  The Pacers offense that moved the ball so easily during Game One was not ready for this manic and physical display.

As is usually the case, the team that wanted it more won.  The Knicks were flawed but tenacious through 33 minutes, but when the snowball started to roll downhill they got the hell out of the way instead of stopping it.

That’s why these series are best-of-seven.  The Pacers have three days to wash the worst 15 minutes of their basketball lives out of their mind, and the Knicks have the same amount of time to try to maintain their mojo.

Carmelo Anthony led the Knicks with 32 points on 13-of-26 shooting, although 11 of those points were scored after the tale of this game was told.