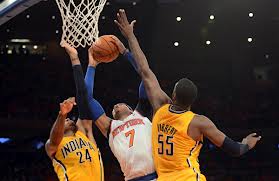 This will be a foul tonight. There is no level of vertical that will be enough for Roy Hibbert.

Choose whatever reason you like – the NBA rigging the game, the officials working to balance things out, the Knicks being more focused, or things just not going quite as well for the Pacers – but tonight’s Game Two against the Knicks may as well be over right now because there is no way the Pacers beat the #2 seed from the biggest TV market in America twice in Madison Square Garden to start the Eastern Conference Semifinals.

The Pacers had a whole lot go right in Game One – D.J. Augustin scoring 16 points in 13 minutes, the officials respecting Roy Hibbert’s verticality, Carmelo Anthony scoring one less point than his 28 minutes, and the Knicks being out toughed will not be repeated tonight.

The Pacers will lose – badly – because basketball is a weird game where strange results rarely repeat.  Great shooters slump, but not forever.  Great defenders have lapses, but not often.  Poor shooters make it rain, once in a while.  Good officials get calls wrong once in a while, and bad refs occasionally get it right.

In basketball and life, shit happens, and shit happened to the Knicks on Sunday.  Tonight, it will be the Pacers turn.  That’s life, and that’s basketball.

The great test for the Pacers will come on Saturday when they play at Bankers Life Fieldhouse with a chance to go up 2-1, and then Tuesday with an opportunity to force the Knicks to sweep the final three games to advance to the Eastern Conference Finals.  That’s when the Knicks will either nut up or back off, as the Hawks finally did in Game Six of the opening round.

Basketball is a game of will.  Does your team have the will to execute as it needs to, or does your opponent have the will to stop you?  Can you patiently move the ball as needed to earn the look that best suits your offense, or will the opponent tempt you into taking the wrong shot at the wrong time.  And even if everything goes right, can the refs be trusted to understand the game well enough to know the razor thin difference between a block, charge, and no call.

There are enough borderline fouls during every possession to give the refs a chance to cause enough mayhem to change the result of just enough possessions to determine the flow of the game.  There’s nothing nefarious afoot, or at least I don’t believe there is, but calls even out – if not during one game, then for a series.

Tonight’s game finds the Knicks with their backs against a wall, and referees who might have seen that the rules of verticality give the Pacers an advantage – perhaps one that can’t be overcome.  Tonight, Hibbert might not be able to keep his arms perfectly perpendicular to the floor.

Tonight in front on amped up fans who believe basketball was invented in the Garden, the Knicks will respond as professional competitor normally do.  They will summon all they have, and unleash it on the people New Yorkers believe are idiots for living 711 miles to the west.

The Knicks will have their triumph tonight, and then come to the prairie for a serving of basketball played where people appreciate it best.