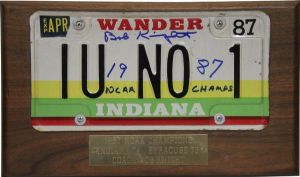 The bid for this autographed and mounted “Wander Indiana” license plate is $303.

When there were a few more boxes than I would like in our attic, the Sterlings had a family garage sale where we netted $500.  Bob Knight is evidently not a fan of garage sales.  His junk is available for sale at auction on Steinersports.com.

To be fair, there is some one-of-a-kind memorabilia for sale as well, but the most interesting stuff – as was the case less than a year ago with the first Bob Knight anything-in-the-house-that-isn’t-nailed-down-must-go-auction – is the crap that most would haul to Goodwill.

Not sure whether Knight is in dire need of money, entrepreneurial son Tim saw a chance to make some cash through this liquidation of memories and junk, or perhaps there is a charitable organization that will be the benefactor.  Regardless, the sale is simultaneously sad and hilarious.

The good stuff includes Knight’s 1973 Big 10 Champions ring, his 1984 Olympic Gold Medal trophy, and the game ball from the last game Knight ever won.  There is more, but those are highlights.

The crap – hey, who am I to judge what’s crap – includes (but is not limited to) a beige Bugs Bunny golf shirt (size XXL), a nondescript tie rack, 10 ties of various widths and colors, a set of towels that appear to have been liberated from The Ohio State University, a gray tee shirt with “AAA” printed on it, and enough St. Louis Cardinals swag to outfit a team.

To continue to prey on the loons who want to touch anything Knight has owned, as though he is some kind of irrational deity, is a pathetic cash grab.  Just because you can sell something doesn’t mean you should.

I’m going to bid on some of the Cardinals stuff because it’s priced well below retail, and I doubt Knight wore any of it more than once.  I guess that opens up a fourth category that Knight would never have expected – bargain hunters.