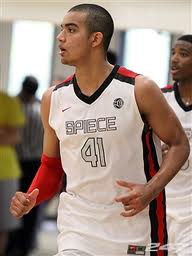 The only similarity between Trey Lyles and every other Loyola recruit in 50 years would be his species.

There is something creepy about caring deeply about where a high school kid is going to go to college, but for the same reason ‘American Idol’ transfixed America (while the judges were interesting), trying to project high school athletes into a collegiate environment is fun.

So I keep track of the kids around Indianapolis, and that means checking their recruiting pages regularly.  Last week there was a surprise on Tech High School’s Trey Lyles page.

Lyles, a 6’10” senior-to-be, who is ranked fourth nationally in the 2014 class has been offered by the usual suspects – Duke, Florida, Indiana, Kentucky, Louisville, UCLA, Georgetown, Illinois, Michigan State, North Carolina, NC State, Ohio State, Purdue, Stanford, and even Butler.  Those were predictable.  What school wouldn’t want a top five kid?

The 16th team right between Indiana and Michigan State was fascinating in its inclusion.  Loyola of Chicago, a bottom dweller in the Horizon League since the graduation of Blake Schilb in 2007, has also offered Lyles.

That’s like me bringing my checkbook to Auburn, Indiana, this weekend to bid on a 1930 Duesenberg Boattail Speedster.  I can dress the part, register with the other prospective buyer, hold a champagne flute, and appear to belong, but when the bidding starts for real, I would be exposed as what I am.

Loyola is a wonderful school.  My son played basketball there, but after the Ramblers won the 1963 NCAA Tournament, they returned to form.  It could be argued the Loyola is the seventh most prestigious program in Illinois, and yet they are listed with the all-time great college basketball programs who have offered one of the best players in his class.

My guess is that when coach Porter Moser called Lyles to offer the scholarship, he had to introduce himself several times.  “Hi, Trey.  This is Porter Moser at Loyola….Loyola of Chicago…Moser…Horizon League…yes, the one that Butler left…Chicago…Anyway, we’d like to offer you a scholarship…Porter Moser…Hello.  Trey?  Hello?”

While I applaud Loyola for wading into the deep waters with a bamboo pole and a bucket of worms to catch a marlin, I have grave doubts that Lyles re-opened his recruiting after committing to Indiana to land on the Rogers Park campus of a program that a month ago celebrated it’s 50th anniversary of the only relevance it has ever known.