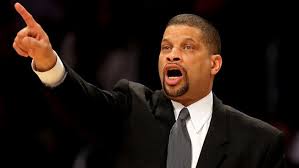 Rutgers basketball coach Eddie Jordan is a distinguished alum for a school where he never graduated.

Jeez.  Who’s in charge over at Rutgers?

Not two months after basketball coach Mike Rice was told to pack a box after years of verbal and physical abuse were revealed in hilarious and horrifying practice videos, Deadspin has uncovered his replacement never earned the degree he has claimed to.

Yep.  Eddie Jordan not only claimed to have earned his degree.  He still says that he really did earn it, but because of an error in registration the credits were never applied to his transcript.

The university for its part honored Jordan in 2004 as a member of its Hall of Distinguished Alumni.  How does Deadspin know more about who graduated from Rutgers than Rutgers?

Jordan says that some of his professors are still at Rutgers and will remember that he did the work needed to finish the work for his degree – in 1984.  I don’t know what I had for lunch last Thursday, but these professors are going to recall who was in a class 29 years ago?

Personally, I don’t care if a guy running a business earned his degree, but a coach who is trusted to shepherd students through college with the goal of earning a degree should have at the very least set a legit example himself.

Then there is the issue of misrepresenting his degree status in the same way that got George O’Leary canned at Notre Dame shortly after being hired as football coach.

That doesn’t appear to bother Rutgers as the knuckleheads there are still expressing excitement over Jordan’s hire, “His athletic skills and leadership and his professional accomplishments have been a source of pride for Rutgers for more than three decades,” reads part of a statement released after Jordan was outed as a liar.

And while no record can be found of Jordan claiming that he earned a degree, he has certainly had ample opportunity to straighten this out over the years – maybe when the school called to inform him that he would be honored in the Hall of Distinguished Alumni.

Rutgers inability to keep Rice from treating student-athletes like R. Lee Ermey treated Private Pyle in “Full Metal Jacket” until a video was leaked to the media, and it’s obvious and glaring lack of diligence in determining whether a high profile hire had actually earned a degree from the school where he applied, casts it in a miserable light.

Not only should a leader trusted to help a group of adolescents become men be held to the same high standard he will maintain for his players, the Big Ten Conference needs to take a good hard look at whether Rutgers is a worthy candidate for inclusion in what members hope is the finest grouping of universities in the world.

After these two humiliations, someone needs to ask what other details are failing through the cracks.  Not only should there be immediate consequences for the hiring managers, a thorough independent inventory of standards and practices should be mandated.

The crackpots in charge at Rutgers owe answers to everybody, and Governor Chris Christie looks like a rube for so publicly backing president Robert Barchi after the unpleasant Rice incident.

Heads need to roll, and maybe it doesn’t stop until Big Ten Commissioner Jim Delany and the member presidents have a serious conversation about the high cost it is paying for adding a school so devoted to embarrassing itself and those who do business with it.

36 thoughts on “Big Ten Basketball – Is It Too Late for the Big Ten to Reconsider Admitting Rutgers?”