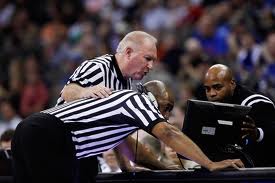 Expanded opportunities for fans to watch refs watch TV are on the way for 2013-2014.

The quest to get every call right is killing the momentum of a great great, and those interruptions are going to become more frequent during the 2013-2014 college basketball season.

Here are the changes, as reported by ESPN:

I loathe replay in all its forms because it elevates the importance of the result of the game to a ridiculous standard.  Sure, it would be great for Cardinals fans if the result of the 1985 World Series hadn’t beed adversely affected by Don Denkinger’s heinous effort in ruling Jorge Orta safe, but if the corrective measure in college hoops requires fans to watch three officials huddle around a monitor at half-court for three minutes while they make certain feet were behind a line, or the ball went of the same person they saw it go carom off, the fun of watching the game evaporates.

I’m all for getting calls right, and if there is a way to streamline the process using an offsite ref in a room as is the case with the NHL, beautiful.  If there is a fourth official who does nothing but sit courtside to watch for screw ups, okay.  Being forced to watch three guys watch TV does nothing to enhance the fans’ pleasure of the game.

At the minimum, the refs should be able to determine the correct call before fans at home do, but when has that ever happened?

The momentum continues to carry toward every call being reviewable regardless of the amount of time left in the game.  After all, as the head of the committee that approved the rule change told ESPN, “We felt that two minutes was better than one minute. Obviously, a possession with 1:10 left is just as important as one with just under a minute left.”

So that isn’t true at 2:10 left in an eight point game?  And if that’s true, who to say that a possession given to the wrong team with 8:46 left in a game that finishes 65-64 wasn’t the deciding factor in the game?

The slippery slope college basketball is on is leading to two-and-a-half hour games with as many video reviews as dunks.

Technology shouldn’t make our lives more tedious, but in the hands of the people approving these measures, it does.