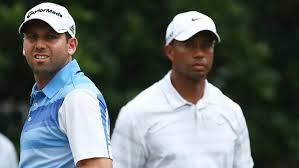 People disliking each other is not just a part of life, it’s good for business in sports.

Sergio Garcia was supposed to be a challenger for Tiger Woods from the time he exploded on the PGA Tour as a teenager.  Now 33, he’s won only eight times on the tour, has been a top ten finisher in 18 majors, but has won none of them.

Woods has taken a different path, and suffers no challenger lightly, winning 77 tour events and 14 majors.

Yesterday, paired together, Woods got under Garcia’s skin by grabbing a club from his bag and drawing cheers as Garcia was in his backswing.  Garcia pushed his shot into the trees and bogeyed the second hole.

What prompted the post round insults from each player isn’t really as important as the fact that they occurred.  The result is conflict which leads to drama which leads to viewers who aren’t intrinsically fascinated by guys clubbing little dimpled balls with sticks.  That’s good for everybody.

Golf has been a civil game for far too long.  Jack Nicklaus was a very gracious and humane competitor.  Tom Watson might have been an even more considerate person.  Gary Player and Arnold Palmer remain nice and congenial.

Tiger brings a little nasty with him, and Sergio is pissy too.  The hope has always been that Phil Mikelson would find a way to ignite a rivalry that would compel viewing, but Phil and Tiger have rarely played well during the same tournaments.

Finally, this afternoon, two guys unafraid to share with us their mutual disdain will have at it, and we will have a reason to stay awake from their round opening drives at the Players Championship to the last putt.

Fans don’t need UFC bouts on the fairways, but friction is always welcome.