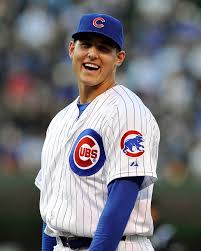 If the home of the Chicago Cubs is in doubt, the player who will man first base for the next decade or so is not.  Anthony Rizzo has signed a seven-year, $41-million extension with an additional two-year club option that could drive the value to $60-million.

This deal is a slightly less expensive extension of the strategy used to lock up mercurial shortstop Starling Castro for seven years.

The Cubs decision to find key pieces and lock them up is a sensible alternative to the timeline mandated in the labor agreement governing Major League Baseball with arbitration and free agency allowing the market to drive contract amounts.

By paying a reasonable premium early, the Cubs lock down youth through a significant portion of their prime.  Anthony Rizzo has shown himself capable of being an excellent all-around first baseman, with a reportedly outstanding work ethic.

There is something different about the way the ball comes off Rizzo’s bat, and that results in the ball flying a long, long way.

Born on the first anniversary of the first unofficial night game at Wrigley Field, Rizzo will turn 24 in August, and still hasn’t played an entire season in the bigs, but he’s worth the risk.

After a nice first quarter of the 2013 season, Rizzo is on pace to hit .280, 30+ home runs, and drive in 100+ runs.  That was enough to prompt the Cubs to reward the potential that has motivated Cubs General Manager Jed Hoyer to trade for him twice – once to the San Diego Padres and then to the Cubs.

The Cubs have shown a wisdom in not wanting to do the same job twice.  Once they find a longterm solution to a positional dilemma, the Cubs lock it down so they can work on another problem.  For a team with as many problems as the Cubs have, that’s smart.

The primary problem is, well, everything else.  The bullpen has been stabilized by the signing of Kevin Gregg, and the rotation has performed better than anyone had a right to hope for, but the only two pieces of that puzzle who can be expected to contribute once the Cubs return to respectability are Jeff Samardzija and lefty setup man James Russell.

Expect many of the other source of hopeful glimmers to be dealt to contenders for prospects near the trade deadline to replenish a farm system left in ruin by the grim regime of former GM Jim Hendry.

While the Cubs continue to show no commonalities with a championship baseball team, the decision to sign Rizzo has a chance to pay enormous dividends as his cost is now fixed through his 31st birthday, should the Cubs wish it so.

If they can lock down second baseman Darwin Barney, three quarters of a high quality infield will be in place.  Then, it will be time to get to work on all three outfield spots, the front end of the rotation, and bullpen.  Lot’s to do, but the Rizzo extension gives the Cubs one less question to answer.

Whether Rizzo plays the following nine years in Wrigley Field is yet to be decided, but he will be a Cub.