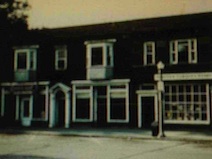 White’s is in the lower right, and my grandmother’s place is upper left.

Not sure these places exist anymore – the little store that is actually owned by the guy whose name is on the sign above the door.  Growing up in Lake Bluff, Illinois, every kid spent his allowance at White’s Variety Store.  Mr. White stocked his shelves with candy, baseball cards, inexpensive toys, and some stuff parents were interested in, but I never walked down those aisles so I have no recollection of what they were.

We spent a lot of time at White’s.  It was the epicenter of a kid’s life in Lake Bluff from birth until adulthood.  It was a social hub, and in a town of 5,000, it was the only place with stuff we wanted.  The little girl in the AT&T commercial who repeats “We want more!” would have fit right in at White’s.

My grandmother lived about 30 feet from White’s, so I was there more than most and learned some lessons there that stick with me.

Stealing is wrong – That’s a pretty big lesson, and I learned it young.  When I was three, the principles of retail merchandising alluded me, and I tended to grab what I liked and walked with it.  I have no idea how many small toys or hunks of candy I hauled out of there before I took a fire truck.  My parents took me back to the store to return it and apologize.  A few years later, I palmed a piece of penny candy because I had no money with me.  The lady at the store grabbed me and explained how unfair that was to Mr. White.  She asked for a phone number where she could reach my parents.  I gave her my 234-1023 – my grandmother’s phone number.  She picked up the phone to call, and I bolted from the store, ran upstairs to the grandmother’s, and answered the phone.  She asked to speak to Mrs. Sterling, and I said, “This is she.”  Crisis averted, but I never stole anything again.

Foraging Through Garbage Is a Waste – My attention span as a youth was less a span than it was a point.  I wasn’t unlike Martin Short’s character in the underrated “Clifford.”  Unfed, my imagination would roam unchecked.  As a result, I kept myself occupied at all times, and part of that routine while at my grandmother’s was a check of the boxes in back of White’s to see if perhaps one of the inattentive staff might have accidentally thrown out something of value – a box of Sweet Tarts, baseball cards, or Bubs Daddy bubble gum.

One night, when I was 12, I found an unmarked box still sealed.  My imagination ran wild.  What could be in this box?  I ran up the stairs and through my grandmother’s apartment to the back bedroom.  I shook the box, and tried to guess what it might hold.  I went all Charlie Bucket on the thing, peeling back the tape very slowly – like Charlie opened wrappers of Wonka Bars hoping it contained the last remaining golden ticket.

I peeked into the box, and saw no candy, cards, or toys.  It was filled with extension cords.  All those years of looking through empty boxes, and my bounty was 20 cheap extension cords.  Damn it.  I returned it immediately to White’s, complete with the story of how I found them.  The next day, Mr. White came to my grandmother’s with a dollar bill that was to serve as my reward.  Of course, I ran downstairs to White’s and bought nine packs of baseball cards.

Mister is not a first name – When Mr. White died a couple of years ago at the ripe old age of 101, I was stunned by his obituary.  It listed his first name as Ralph.  I frowned, and stared at the listing for a few minutes.  “Ralph?”, I thought.  It never occurred to me that he even had a first name.  When I was three, he was Mr. White, and in 2005 he was Mr. White.

There were some well-respected people living in Lake Bluff when I grew up.  Elmer Vliet, the head of Abbott Pharmaceuticals, lived next door to us, and he was probably my very first friend despite being between 70 and 80 years older.  I used to play in his house.  But Mr. White, among kids, was the mayor, president, and king all rolled into one.  He was revered, and easily the most famous adult in town.  He was Mr. White in the same way Chicago’s Mayor Daley was Mayor Daley.

There is more to going to a dance than asking the girl – On a Wednesday prior to a Friday night school dance, I decided to move from the knucklehead group that played bumper pool upstairs at the Methodist Church to the players who actually danced with girls in the basement.  If a cute girl named Marj was at White’s after school, I would ask her to go.  If not, it wasn’t meant to be.  I rode my bike toward White’s and peeked around the corner to see if Marj’s powder blue ten-speed was out front.  It was, and I moved toward the door.

On cue, Marj came out, and I asked if she would go to the dance with me.  She smiled and said yes.  I smiled and said okay, then turned to ride home.  I was thrilled.  The first half of the ride home was great.  I was proud that I sacked up, and asked a girl to a dance.  And then I stopped in the middle of the street.  What the hell was I supposed to do now?  Do I have my Dad drive us?  Do I pay for her?  Surely, she wasn’t supposed to pay for me?  The wise thing would have been to pick up the phone and ask one of the savvy veterans to draw me a map, but that would open me up to mockery.  I could have asked my Mom and Dad, but they were adults, and what could they possibly know about junior high dance protocol.

I decided to trust my gut when I got there.  What my gut told me to do was hide in the middle of a huddle with Rodney Turpel, Nick Gabriel, and Peter Palmer.  Marj was on the other side of the crowd scanning the boy’s side, and I successfully evaded for a good ten minutes.  Finally, she saw me and walked over to say said hello.  I was too nervous to speak or function.  We walked in together, with Marj paying for herself.  I brought enough money for both of us because it seemed presumptuous and insulting for me to cough up two dollars.  Being afraid that she would infer my payment as some kind of advance is even more idiotic than the rest of this bizarre tale.

The music started, and I almost vomited.  Looking like the tools who stood in lines across from girls to dance so awkwardly was unacceptable, but I tried like hell to figure out how this activity was enjoyable to others.  I think we made it through a whole song before I excused myself.  Off I went to the bumper pool room with Rodney, Nick, Pete, and the other fellas.  The guilt over abandoning Marj was even more overwhelming than my fear of dancing, so I headed back downstairs where I went even more deeply chicken shit by explaining to Marj that I had a terrible headache.  She claimed to be similarly afflicted, and I left early.

Jumping into things without having any idea what I was doing has paid off for me in other areas, but as a seventh grader with Marj, it made for a miserably humiliating night.