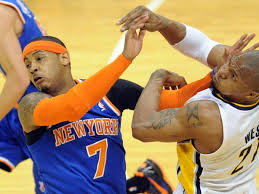 Carmelo Anthony needs to get physical if the Knicks are going to win Game Four.

If the Knicks win tonight’s game, the series between the Pacers and Knicks will be tied at two, and the Knicks will have two games left at home to put away the young upstarts from Indiana.  If the Pacers win, they will have a 3-1 stranglehold that will give them three shots at winning the series.  But that doesn’t make tonight a “must-win” game.

Down 3-1 is a place the Knicks would rather not be, but a win in Game Five, and all that stands between them and a real must-win game in Bankers Life Fieldhouse that would force a seventh game.

The Pacers have already won a game at Madison Square Garden, so believing they could split the remaining two isn’t difficult.

Until the fourth game is won by either team, both will be alive, and alive is enough.  Neither team can win their fourth game until they win their third, and only the Pacers can do that tonight.

Knicks center Tyson Chandler sounded all the wrong notes yesterday as he basically told Carmelo Anthony via the media to share the ball.  To whom he should share it would be a good follow-up question.  No one else on the Knicks appears able to score.  J.R. Smith is an option when he can make shots, but that hasn’t happened yet in this series.

Nothing like a team that points fingers at one another to set an opponent to licking their chops.  In-fighting isn’t an automatic precursor for losing, but it shows an unhealthy level of trust among a group playing a game that relies on trust.  The rest of this series will be determined by who can put the ball in the bucket more often, not who gets along the best.

Winning Game Four will require focus and grit.  The Knicks have to find a way to shoot open threes and get rebounds.  The one game they have won was determined by defensive pressure that forced 21 turnovers that led to 31 points, and kept Indiana from running their offense.  When the Knicks are forced to run their half court offense, scoring is a challenge against the long and athletic Pacers.  Without scoring points, winning is tough.

Paul George is one of the best on ball defenders in the NBA, and his length and quickness give Knicks shooting machine Carmelo Anthony fits.  If no one else is willing or able to put the ball in the bucket, Anthony needs to get open looks or draw fouls.  If Anthony doesn’t score in bunches, the Knicks struggle.

The Pacers have been successful when they are able to feed Roy Hibbert down low.  The big man has worked tirelessly to develop a substantial battery of post moves that make stopping him a tough assignment.  At 7’2″ with arms long enough to hug a normal person twice, Hibbert’s hook shot is almost unstoppable once he catches on the block.

The Miami Heat await the winner of this series – not to sell short the chances of the Derrick Rose-less Chicago Bulls winning the next three games to close out the Heat, but it’s unimaginable.  They suffocated the Bulls last night in an 88-65 mauling, and beating them four times is going to be a tall order (much taller than Roy Hibbert) for either the Knicks or Pacers – not much of a reward for making the Eastern Conference Finals.

But let’s call tonight’s Game Four what it is, an important step on the way to a fourth win for one of two pretty good basketball teams – nothing more, nothing less.