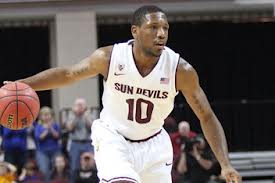 Evan Gordon will be the second Gordon brother to report to Bloomington for one year of hoops. Will there be a third?

Conspiracy theorists among basketball fans will see the offer to and commitment from Evan Gordon as a prelude to a kiss for his brother Eron.

Evan is a 6’1, 187 lbs., graduate eligible transfer from Arizona State, who began his collegiate career at Liberty.  Now, he’s coming home to spend one year where his brother Eric also spent one year before leaving for the NBA.  He’s been a productive player, averaging 12.1 points per game during his three college seasons – 10.1 last year against the Pac 12.

He’s an okay shooter, making 34.5% from beyond the arc without a season of greater than 35.6% or lower than 33.7%.  That kind of consistency would lead people to suspect a similar level of productivity at Indiana.

So people will ask why a 6’1″ kid who scores 10 points for Arizona State and makes roughly one-third of his threes is coveted by Indiana.

Well, the Hoosiers need a guard who can provide depth to replace the recently departed Remy Abell, and Gordon projects to be at least as productive as Abell, so there is logic to bringing Gordon in regardless of younger brother Eron.  Evan is a good basketball player.

But the youngest Gordon is wrapping up his freshman year at North Central High School (where the Gordon Family is to coach Doug Mitchell as the one-and-done rule is to John Calipari) after averaging 19 points per game.  Over the last seven games of the regular season, Gordon was 24-48 from three-point range, and finished scoring in double digits 18 of those 20 games.

Indiana, Purdue, Arizona, and Nebraska have offered scholarships to Eron.

He’s reported to be the best player in his class among Indiana prep players.  That makes him a big target for the class of 2016, and how better to give parents and a little brother a good look at the positives of a program than by giving an older brother a taste of it with an otherwise latent scholarship.

That’s not to say that Indiana coach Tom Crean pursued Evan with an eye toward Eron, but that it’s a nice benefit is indisputable.  Nothing wrong with that.  It’s not like Evan is some sad sack kid who has no skill or athletic ability.

His cost is a one year ride, which limits the downside, and if he can give the Hoosiers some defense and a little scoring, they need some of that with over 80% of their scoring from the 2012-2013 season gone.

Regardless of the destination for Eron’s talents in three years, Evan is a solid pickup for an Indiana team unsure from where its offense will come next season.