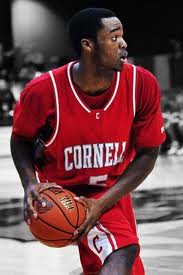 Kyle Neddenriep of the Indianapolis Star has reported that former Cathedral High School standout Errick Peck has committed to Purdue for his post-grad year of eligibility.

Peck spent the last four years at Cornell, but Hoosiers know him as a an Indiana All-Star who enjoyed a nice prep career at Cathedral.

What Purdue gets in Peck is a selfless and coachable player who can do everything.  He’s 6’6″, long, and athletic, able to shoot it, and possesses outstanding hands.

He can post up, step out and shoot, and is an accurate passer.

Peck was a teammate of my son’s at Cathedral, and he enjoyed Peck as a person and player.

It was baffling to me that Purdue coach Matt Painter didn’t recruit Peck straight out of high school as he signed Cathedral teammate Kelsey Barlow.  He certainly must have seen him play a great deal.

The only downside to Peck in the way he was evaluated was that he was never selfish.  His play is never about him.  He’s a lot more Pacer than he is Knick.

I coached him in a couple of fun youth games when he was 16, and while I was more a proctor than instructor, anytime I called a timeout, Peck ran to the huddle and looked at me with an expectation that I might say something smart to help the team win.

He listened attentively, and always did exactly what he was told – by me.  Imagine the attention he’ll pay to Painter.

This may not appear to be a big deal for the Boilers, but it can be.  Peck will help the culture of Purdue Basketball with his presence, and when called upon, he will do some big things, but a lot of little things all with the intent of helping the team.

Congrats to Purdue, Matt, and Errick.