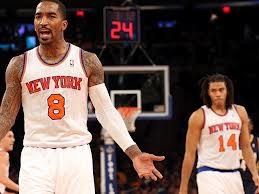 Perhaps a little cheese with that whine, Mr. Smith

The Pacers took a 3-1 lead in the Eastern Conference Semifinals last night with a beat down that made the result of the game academic from the opening tip.  The Knicks looked like a beaten team because they know they are a beaten team.

Here are ten ways to tell the Knicks know they are 48 minutes of play tomorrow night in Madison Square Garden from playing a lot of golf:

10 – Spike Lee was AWOL last night  If Spike isn’t willing to drop $40K to get national TV exposure for his silly orange hat and ill-fitting John Starks jersey, all is lost.

9 – It’s mid-May and Carmelo is on the floor  In his ten seasons, Carmelo Anthony has played for ten playoff teams including this year – eight of whom took a dump in the first round.  The 2009 Nuggets bowed in the Western Conference Finals.  He’s capable of lifting a team in the regular season, but against a team that has played against him three or four times previously, adjustments are made to frustrate him.

8 – James Dolan owns the Knicks  It’s just inconceivable that Dolan could ever preside over a winner.  His decision making has been so scattershot that the Knicks producing extended excellence is a pipe dream for the franchise and its fans.  No man responsible for putting Isiah Thomas in charge possesses the requisite faculties to win.  He tried to make up for it by hiring Donnie Walsh, but Zeke’s thumbprint is tough to overcome.

7 – Indiana fans are chill  The Pacers are not a franchise where a lot of good has happened since the retirement of Reggie Miller in 2005.  If any NBA fans should expect the worst, it would probably be 76er or Warrior fans, but Pacers fans are not far down a short list of the easily spooked.  They are far from spooked.  Today, they are calm and confident – if a little bitter over the national media’s bashing of the Knicks while not talking about the Pacers.

6 – Tyson Chandler is calling out teammates  I don’t blame Chandler for being frustrated as the vast majority of the shots taken by Carmelo Anthony and J.R. Smith clank off the rim into the hands of Pacers, but somebody has to shoot the ball.  If not Anthony and Smith, who?  Taking shots in the media is another last resort tactic,and Chandler played that card after Game Three.

5 – Indiana plays with more poise  The Pacers are a young group.  Iman Shumpert is the only player younger than any player in the Pacers rotation other than David West.  J.R. Smith is 27, as are several Pacers.  But the Pacers are playing with total confidence and poise while the Knicks are panicked.

4 – Jason Kidd is playing  Talk about a hail mary.  Jason Kidd’s career is over.  He hasn’t made a shot since going 1-2 in Game Two of the six-game test against the Celtics.  That’s 17 consecutive misses.  During the span since his last make, he’s responsible for 13 turnovers, and eight fouls.  He’s 40 years old, and it’s over, but the Knicks have no other option.  So out he trots.  It’s sad to see a hall of famer go out like this, but he made over $3-million for playing this final season – more than I’ll likely pocket in my lifetime unless I can stay productive through the age of 83.

3 – Two Technicals  The two technicals came in the first half as the Knicks were throwing anything they could hold at a wall to see if it sticks.  When even tempered focus is getting you nowhere, logic drives competitors to ill-temper.  It almost never does anything make make the angry players look silly, but it is an option of last resort, and the Knicks went there too early and too often without any prompting.

2 – Mike Woodson’s panic   The coach of the Knicks started a group for last night’s game that has never played a single minute of basketball together.  He was right to do it.  To Woodson’s credit, he knew that the time had come for a hail mary, and throwing a bunch of disparate pieces on the floor to start the game qualifies.  Woodson knows that barring something he hasn’t seen yet in the series, it will be over without coming back to Indianapolis.