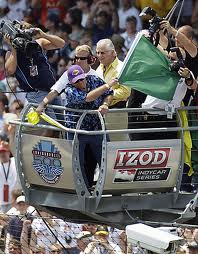 The IMS can’t beat Jack Nicholson as the honorary starter, but they could try.

Jack Nicholson is cool.  When he dropped the green flag for the 2010 Indianapolis 500, I wanted to see it.  Nicholson has lived a life that 99.9999% of us would swap ours for in a minute.  If I’m at home watching a Nicholson movie, I sometimes wonder what he’s doing at that moment.  It has to be something interesting as hell.

It’s hard to clear the Jack Nicholson bar for selecting the guy or girl who is asked to drop the green flag to start the 11 rows of three cars flying past the yard of bricks for the first of 201 times.

The first celebrity to wave the green flag was Nick Lachey, who became famous (sort of) by being one of the four guys in the boy band 98 Degrees.  He then married Jessica Simpson, and suddenly he was a get for the “Hey, I need a celebrity to do something!” circuit.

The Indianapolis Motor Speedway has bobbed and weaved since by inviting local sports icons like Peyton Manning and Reggie Miller, a Congressional Medal of Honor winner, a sponsor, and Sugar Ray Leonard.

Today, the announcement was made that little known actor Michael Pena will be the honorary starter for the 97th Running of the Indianapolis 500 Mile Race on May 26th.

At first, I thought asking the star of mid-1980s HBO fave “Eddie and the Cruisers” was an odd choice.  I was told I was thinking of Michael Pere’.  Then I remembered that 15 new episodes of “Arrested Development” are being released this month on Netflix, and the kid who stars as George Michael Bluth would be a logical choice.  Nope, that’s Michael Cera.  Okay, the wrestler then – the WWE guy who starred in “The Marine”.  No, that’s John Cena.  Frustrated, I googled the guy, and looked at a picture.  Oh, I said, the guy who used to be on “Law & Order”, and is now on a funny show that’s on right after “Modern Family.”  Good choice – seems like a nice guy.  No, that’s Jeremy Sisto.

So just who in the hell is Michael Pena?  He will be one of the voices in the animated film “Turbo”, which will be released on July 17th.  It also stars Paul Giamatti, Ryan Reynolds, Bill Hader, Ken Jeong, Snoop Dogg, and Samuel L. Jackson.  They must all have plans Memorial Day weekend.

Celebrity punch to build some interest in quarters where the Indy 500 is nothing more than a quaint notion of a racing era gone by is a good idea that is hard to argue with, but the Indy 500 is an event where I am reminded each race day of the toll paid by so many who built the race.  There have been 69 men killed at the Indianapolis Motor Speedway during testing, practice, qualifications, and the race itself.  Drivers, mechanics, crew members, spectators, and even a small boy outside the track was killed by a wheel that came loose during a wreck have died.  Countless more have been injured badly in the quest for speed on the world’s greatest race course.

The Indy 500 isn’t simply a party.  It’s a great race held on hallowed ground, and to salute military personnel, former drivers, or a unique celebrity is entirely appropriate.

I hope Pena takes some time to learn and appreciate the honor that has been handed to him.  I hope he understands the importance of everything that goes on that day better than the people who bestowed that honor upon him.

There are thousands of people better qualified than to talk about the historical significance of the Indianapolis 500 than me.  I walk around the media center, and there are guys who’ve been at the race every year since the 1940s.  One guy told me yesterday that he missed the first 28 Indy 500s.  That means he’ll watch his 69th this year,

Maybe he should be the honorary starter.