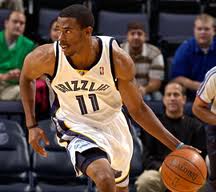 There is a story that has been repeated so many times around Indianapolis that everyone assumes it’s true.  Memphis Grizzlies point guard Mike Conley is working out alongside good friend and teammate Greg Oden early one morning in a Lawrence North High School gym.  Indiana coach Mike Davis is watching Oden, and Mike Conley Sr. walks up and says, “Hi coach, that’s my son Michael.  You interested in him coming to IU?”

Davis says dismissively, “Greg’s the player I came to see.”

Watching ESPN last night, I heard Tim Legler say that Conley has been a candidate for the NBA’s Most Improved Player each year he’s been in the league.  I shook my head the same way I did when I heard the story about Davis overlooking the best high school point guard I’ve seen.

Conley has been in the NBA for six seasons, and his statistics from year three thru five were incredibly consistent, and a little better as a scorer in year six because he shot one extra three pointer and free throw each game.  Here are per game stats from year-to-year from his rookie year through this season:

For his rookie year and part of his second, Marc Iavaroni was the head coach of the Grizzlies, and Lionel Hollins took over late in year two.  Once Hollins showed up, Conley’s minutes and stats took a step up.

Through jr. high and high school, Conley played in Oden’s shadow.  People came to see the huge kid who dominated the interior with his length, but the smart ones left talking about the point guard who ran the offense and set the defensive tone by taking away whatever the opposition was trying to do.

Conley never played out of control, and was just fine letting teammates shoot the ball.  After watching him for a while, it became clear that he was more than capable of scoring, stealing, rebounding, and dropping dimes anytime he needed to.  He was never out of control, and never sprinted full out.

At no point did I ever see him show any emotion on the floor.  If he derived joy from winning basketball games or was crushed by very infrequent defeats, he never let anyone know it.  When the Spiece Indy Heat travelled with the Spiece Central Stars (the team that was one year younger for whom my son played), I never saw Conley smile or speak.  He was a silent and focused assassin, and he seems to be the same guy today.

What Legler should have said is that he is a better analyst this year because he’s noticing the quiet greatness Conley has brought to basketball since junior high.  He’s exactly the same player today that he was then – as a floor general and the leader of his team, he is the same guy.  I believe Legler is the most improved basketball analyst for figuring out who Mike Conley is after six years.

Conley’s Lawrence North team won three straight state championships, the Spiece Indy Heat won many championships in national tournaments, Ohio State advanced to the National Championship game during his only year there, and Memphis beat Oklahoma City last night to advance to the Western Conference Finals.  Mike Conley wins, and does whatever is needed to win.  Oden always got the ink, but Conley was the glue.

Conley’s never been an NBA All-Star, and may never be one.  There has never been a single moment where Conley decided that he was anything other than the point guard for his team.  There is no “look at me” to Conley.  He has never been the “WOW!” kid, but he has always been the biggest reason his teams have won.  Fans in Memphis understand that, and now the country is going to find out too.