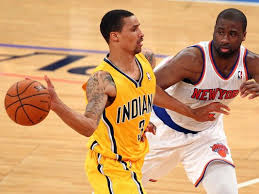 No doubt the Pacers are better with George Hill, but the difference isn’t enough to cost Indiana the game.

The status of Pacers point guard George Hill won’t be known until close to game time, but it shouldn’t affect the outcome in tonight’s Game Six of the Eastern Conference Semifinals against the New York Knicks.

Despite a uniquely skinny bench, Hill’s absence for Game Five, and the Knicks being at home with their backs against the back down 3-1, the Pacers spent the majority of the fourth quarter down only single digits.

The Pacers hit less than 60% from the line, and turned the ball over on three straight possessions late in the game with an opportunity to cut the lead to six.  They turned it over a uncharacteristic 19 times.

Virtually everything that could go wrong in Game Five did, and still the Pacers were in the game until the end.

This is the way the series was supposed to work out following the Pacers performance in Game One, as they wrestled home court advantage from the Knicks 102-95.

Yet, fans on both sides continue to lose their minds with each game.  That Pacers fans expected the Pacers to knock out a team than only lost 10 games at home and finished with a 54-28 record was not logical.  The Pacers, who won less than half of their road games, have done a nice job defending the Knicks, but that doesn’t translate to grabbing two of three in Madison Square Garden.

The Pacers present too many defensive problems for the Knicks to overcome at Bankers Life Fieldhouse.

Carmelo Anthony averages right around one point per shot through five games, which is an unacceptable level of efficiency.  J.R. Smith still can’t find the bucket – shooting 22-75 for the series, and 4-15 in a successful Game Five.  Minus the excellent shooting of Chris Copeland, the Knicks would have averaged a miserable 1.0 points per shot – and that should never beat a quality NBA team.

The Knicks and their media continue to write the final chapters of a great series comeback without any evidence that it might occur.  The Pacers have not just been the better team against the Hawks in Knicks in the postseason, they have been dominant.

They are 5-0 with wins of 17, 15, 23, 7, 11, and 11 over two typically self-centered teams.  The Hawks clearly disliked one another, and there is very little to suggest anything different among the Knicks.  Teams of jump shooters tend to drive each other crazy, and the Knicks have a lot of jump shooters.

They have either blamed themselves or each other after each loss, minus Carmelo Anthony, who appears to have no conscience whatsoever in victory or defeat.  When he catches, he shoots.  When the shots go in, teammates like it.  When they don’t drop, teammates complain, as Tyson Chandler did in saying that passing might be a good alternative to missing shots.

This is a huge game for a franchises trying to wrestle column inches away from Indiana University and the Indianapolis Colts, as well as the hearts of the fans they used to own.

With a win, the Pacers earn two weeks of local adoration and national coverage.  Those are interesting rewards only to the front office folks.  For the players, they want to keep moving forward toward their ultimate goal – a championship, and the big ass checks that come with it.

A loss brings a trip back to New York for another Game Seven between these two rival franchises – at least among the fans who followed the NBA from 1993-2000.

But the Pacers aren’t going to have to worry about that.  As they pack for their next trip, they should make sure to bring pastels and sun block.  They are headed to South Beach.  Pacers win 86-76.  Book it – with or without Hill.

2 thoughts on “Indiana Pacers – With George Hill or Without, the Pacers Will Close Series Tonight”