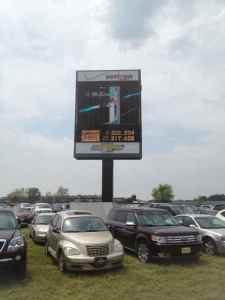 Nothing smells of yesteryear like 4X3 monitors. I won’t have them in my house. The IMS shouldn’t either.

I watched a movie early this morning – part of which took place at the Indy 500 – that described driving in the race “as a sacrifice of their lives so that millions of drivers could be safer.”

That movie, “Speed” with Jimmy Stewart put into context what the race used to be.  It became a quest for speed with barriers that were knocked down periodically, and track records set perpetually.

The speeds became unsafe and the costs too high.  Now, the Indianapolis 500 has a single chassis and two engine manufacturers.  Innovation is no longer a part of racing at Indy, and the costs keep teams not guaranteed a spot on the starting grid from attempting a qualifying run.

For the second straight year, Bump Day featured no bumping.  What fans paid to watch yesterday was the academic qualifying of nine back markers with no drama.

Pole Day was more fun, but for those around the country who couldn’t make it out to the Indianapolis Motor Speedway, they couldn’t experience the climax for the day as the NBC Sports Network was contractually obliged to air the Preakness post-race coverage rather than the Fast Nine run for the pole.

The Fast Nine running for the pole was delayed by weather to 6:30p, the scheduled end time of the network’s coverage from NBC.  That curious decision is one of a series of many that confound outsiders.  Granted, the events on NBC Sports are generally not in great demand, so whether more than a couple of thousand people noticed is debatable.  Any network that claims the NHL as its core programming is not capable of generating additional interest, so not much was lost.

The drama of Pole Day itself was actually quite cool with owner/driver Ed Carpenter making a run that put him on top of the speed chart.  He’s an Indianapolis guy who attended Butler, and is the stepson of former czar of the IMS Tony George.  For the people who waited until the end of the Preakness post-race to watch the final four runs to try to knock Carpenter off the pole were rewarded by the genuine tension that was obvious on Carpenter’s face.

Carb Day has improved over the years, moving from Thursday to Friday, and integrating a concert by a headlining band.  The Black Crowes reunion show was at Carb Day.  Velvet Revolver and ZZ Top have also played in front of tens of thousands of race fans at this annual party.  This year’s act is Poison, a marginally entertaining band fronted by ubiquitous reality TV star Bret Michaels.

Race day is still an amazing spectacle, but the facility is slipping into a piece of nostalgia itself.  Some updates have been made during the past two decades, including the Pagoda, upgraded media center, and suites that were built for the failed experiment with Formula One.

The vast majority of the speedway is unchanged, including the TV screens that help fans follow the action beyond the sliver of trace visible from many of the seats.

The details appear to have been neglected virtually everywhere.  Nothing reeks of disrepair like failed light bulbs in electronic signs.

I’m a huge honk for the Indy 500.  It’s my favorite sporting event on the calendar.  Jim Nabors singing “Back Home Again in Indiana” makes no sense at all to casual fans, but for me it’s a weird and magical annual moment, when Nabors’ health permits him to attend.  The Gordon Pipers, Purdue Band, and parade of odd celebrities always makes me smile.  Where else are you going to see Ruth Buzzi and Florence Henderson these days?

While the facility is incredibly enormous and complicated, the people running the show must invest in infrastructure improvements that can make it at least appear to be modern to fans under 40.  Bump Day must have bumps, and Pole Day must be seen live on national television.  Lights on scoreboards must work.

This isn’t brain surgery.  It’s simply an attentiveness to detail that appears lacking.

When Detroit hosted the Super Bowl a few years ago, they had IndyCar owner Roger Penske provide a list of upgrades the city should undertake to make a good impression on visitors.  I can only imagine the length of that list.  Penske is one of the best detail guys in the world.  He’s an incredibly smart and organized man.  If the Hulman-George Family can’t see the forest for the trees, they should talk to Penske about taking a long look around.

The Month of May is now down to two days done right.