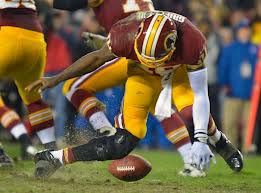 When a quarterback’s knee bends like RG3’s did in the above picture, people rightly ask questions about his future.

Quarterback is the most important position for an NFL team, and three came into the league last year that garnered a ton of attention.  The Colts Andrew Luck and Seattle’s Russell Wilson both enjoyed outstanding rookie campaigns, but the guy who was discussed more than those two combined was Robert Griffin III.

They can all run, and can certainly throw the ball with accuracy and authority, but there is a charisma to the 2012 Heisman Trophy winner that elevates him above all others.  RG3 went down with a torn ACL in a playoff loss to the Seattle Seahawks and Wilson, which many blame on his decisions to tuck the ball and run too often.

RG3 ran for 815 yards and seven touchdowns, so who can blame him or the coaching staff from turning the kid loose.  A 6.8 rushing average is hard to ignore, but running quarterbacks are open to more hits.  With 120 rushes and 30 sacks, minus the seven TDs, RG3 opened himself up to significant trauma.

The question of whether RG3 can lead the Redskins to the promised land has come up many times, and will continue to, so when I got the chance to sit down with one of the best defensive minds in football at Wolfie’s in Noblesville, I asked Coach Rick Venturi about the Baylor graduate’s ability to stay healthy and whether he can be a Super Bowl champion with Washington.