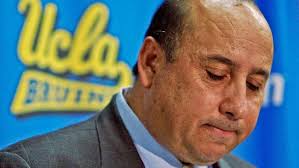 UCLA AD Dan Guerrero needs wins on the basketball court or record cash in the coffers to survive.

Right or wrong, some mistakes stick to a man forever.  In 2002, while head basketball coach at the University of Iowa, Steve Alford defended Pierre Pierce, who was accused of third degree sexual assault.

After another incident in 2005, Pierce pled guilty to third-degree burglary, assault with an intent to commit sexual abuse, false imprisonment, and fourth-degree criminal mischief.

The moral of that story is that if you back a kid who is accused of sexual assault, you better damn well be right.  It appears that Alford’s loyalty to his player was misplaced, and victims rights groups have no sympathy for either Pierce or Alford.

When Alford was introduced as the newest incarnation of John Wooden, it didn’t take long for the question of his support of Pierce to bubble up.  Alford dodged the question, and when athletic director Dan Guerrero was asked whether he had discussed the issue with Alford, he said they did.

When Alford was asked whether Guerrero had asked him, the answer was no.  After Guerrero was told of Alford’s claim that the Pierce conversation never took place, he admitted that he had only spoken to his staff and Alford’s people about the incidents.

Journalists aren’t too bright as a group, but they can smell an administrator trying to backtrack with great speed when caught in a lie.

For some reason, despite Richard Nixon, Bill Clinton, John Edwards, Kelvin Sampson, and Lindsay Lohan, people continue to tell lies, quarter truths, and three-quarter truths.  Guerrero seems to have been caught completely unaware that thousands of people in Iowa continue to loathe Alford because he loudly backed a sexual predator.

Alford should be in the clear, as he didn’t deny that he made a mistake.  His mea culpa wasn’t much more than an admission of ignorance rather than wrongdoing, but it beats lying.

As for Guerrero, he needs to understand that while the media are not generally Mensa members, they are quite keen in sifting through conflicting quotes and smelling blood.

Firing Ben Howland appeared to be a screwy deal at the time, and the hire of Alford was a surprise.  Howland had just wrapped up a Pac-12 regular season championship before being badly beaten in the first round of the 2013 NCAA Tournament (by Minnesota, and soon-to-also-be unemployed coach Tubby Smith).  Sure, there were a few bizarre behavioral turns by the players, but let’s be honest – if UCLA had enjoyed any meaningful success in the NCAAs since 2008, Howland would still be the coach.  If the UCLA players insulted each other like Don Rickles and Jeff Ross, and fought each other like Ali and Frazier, but UCLA went to a Final Four, Howland would get an extension.

Guerrero appears to have hired haphazardly – again.  Rick Neuheisel was a wreck of a coach, who displayed a wanton disregard for NCAA rules at Colorado and Washington, while amassing an unimpressive record – minus three outlier seasons with rosters gathered by his predecessors.

Athletic directors are entrusted with two responsibilities – raise lots of money, and hire good coaches.  In the absence of hiring good coaches, it is acceptable to hire coaches who will not embarrass the university with their presence.

Guerrero is on thin ice for questionable hiring practices, but that ice is thickened by the cash, facilities, and deals he crafts.

Alford’s sin was committed 11 years ago, and has not been forgiven by many.  Guerrero appears not to have learned from any of his mistakes.  Wins will satisfy UCLA fans, but if Alford is unable to right the ship that forced its captain to walk the plank for winning 25 games and a Pac-12 regular season championship this past season after going to three consecutive Final Fours from ’06-’08, Guerrero’s seat is going to get very warm, unless he can dazzle with fundraising.