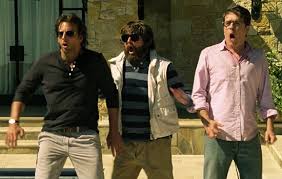 Films are like rock bands. The third in a series is usually a big disappointment.

My expectations for the third installment of the mischief four very different guys get into when the going gets weird were incredibly high.

The writing for the first “Hangover” was clever as hell.  Surprises came so quickly that the movie seemed as randomly constructed as real life.  The second has less laughs, but was a wacky thriller with some oddly unpleasant moments, as well as moments of hilarity and tenderness.

The third started strongly with Chow escaping from prison, and Alan being responsible for closing of an expressway.  His dad is not happy, and that stress comes with a price – the ultimate price.

After the funeral, the decision is made to hold an intervention to get Alan to commit to going to a mental health facility.  On the way there, the Wolfpack’s trip is derailed by the insertion of John Goodman’s exposition filled character.

From that point forward, the movie devolves into a tedious thriller saved (sort of) by formerly likable characters.  The crisp and surprising scripts of the first two Hangovers are not reproduced here.

The first time people do something, they do it because it was fun.  If it becomes wildly popular – like “The Hangover” franchise – people try to replicate it because there is a ton of money to be made.  They muster the discipline to get the sequel mostly right.  By the third go-round, the money is massive, and the creative juices flow like mud.  There is effort, but the joy of creating something fresh is gone.  The result is usually a torpid mess.

I like all four of these characters – even the mostly abducted Doug – so when they do things that are uninteresting or feel impure to the root of my image of their character, I frown.  I frowned a lot during this movie.

Alan has gone from being an innocent locked in his own mind to a manic depressive whose behavior has wandered from being a source of amusement to a source of sadness.  Phil has wandered far enough from his center that he’s nothing more than a functionary used to move the plot.  Stu has evolved from a likable button-down doofus to a mostly confident and normal dentist.  Instead of digging themselves out of the hole dug during a night of debauchery, they have mayhem thrust at them, and the result is nowhere near as much fun.

The goofiness of the villains like Chow is replaced by the pragmatic psychosis of John Goodman, and somehow time in Bangkok stir did something to Chow’s accent which seems less obvious – less cartoonish.

I never felt the need to walk out of the theater, but I never felt rewarded for my investment.  I understand the need to cash in on a franchise to buy bigger homes, an infinity pool, and college educations for the kids, but it’s a shame for those who trusted the result of this third effort would measure up.

“Hangover 3” doesn’t suck, but it’s not true to the first two, and that will ensure that if there is a “Hangover 4”, it will star Pauly Shore, Stephen Baldwin, and Corey Feldman, and it will go straight to DVD.