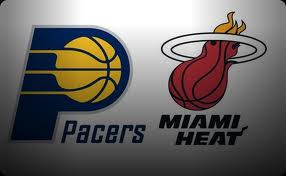 There are a bunch of reasons the Indiana Pacers lost a very entertaining game to the Miami Heat to start the Eastern Conference Finals with a bang.  Had the Pacers won this overtime thriller, there would have been many reasons for that.

Paul George did some things really well, and other things with what appeared to be a troubling malaise.  David West played a great first half, and was just okay in the second half.  The Pacers committed 13 turnovers in the first half, added a few very early in the second half, and then took relatively good care of the ball after that.  Coach Frank Vogel made good calls, and then pulled rim protector Roy Hibbert for the last two defensive possessions which led to two easy layups for LeBron James, the best player in the world.

And that was that.

With Hibbert underneath, attackers think twice about trying to get to the rim.  The small lineup Vogel inserted allowed Heat coach Eric Spoelstra to run a set that cleared space in the lane.

With 2.2 seconds left, inbounder Shane Battier was defended by David West, Ray Allen drew a switch from Tyler Hansbrough, George Hill stayed with Norris Cole, and Sam Young followed Chris Bosh on the switch that left Hansbrough on Allen.  That left George isolated on James, and nobody in the paint to help.  Young could have gotten to James to foul, but backed off.

Maybe with Hibbert in the game, the Heat find a way to hit someone else for an open look, or James would have hit a jumper.  What absolutely, no way should ever happen is the best player on Earth being handed an opportunity to do what he does best.  James getting to the rim on back-to-back possessions that saved the Heat’s ass tonight was the worst case scenario for Vogel, and he coached the Pacers into that miserable reality.

During the postgame press conference Vogel spoke of the fear he had about Bosh being left open if Hibbert was on the floor.  It’s a coach’s job to think about a lot of things, and to be concerned about all of them, but if you cloud your head with worries about Bosh that allow James to streak unimpeded to the rim, you need to calm your mind and remember what’s important.

The series isn’t over.  The Pacers only need to hold serve at Bankers Life Fieldhouse, and steal one of four on the road to win this series.  Pundits are going to talk about the increasing scale of difficulty with each loss.  They will talk about how hard it will be to win four-of-six, and if the Heat win Game Two, they will yammer about the virtual impossibility of winning four-of-five against a team that would have won 47 of it’s last 50 games (IF the Heat win Game Two).

The Pacers are trying to win while they learn, and that includes Vogel.  Tonight, the lesson came with a stiff price tag.