Not long after the Indiana Pacers lost Game 1 of the Eastern Conference Finals to the Miami Heat on a last second layup by LeBron James, much of the post-game criticism turned to coach Frank Vogel’s decision not to have Roy Hibbert on the floor during the last possession.

The moment I noticed Hibbert not out there I said to my friends “Why is Hibbert not on the floor?”  I still don’t fully comprehend the decision, but I can live with it in this particular situation.

In my opinion, the more egregious mistake involving Hibbert getting pulled defensively happened down the stretch in Game 6 of the Knicks series. In that situation, the game was still in the balance with plenty of time and full half-court possessions left.  At that time, I think I yelled while throwing my hands up in the air, “Where’s Hibbert?!”

Last night’s omission of the big fella was more of a question, not question/exclamation. The reason is there were only two seconds on the clock. Would I have elected to have Hibbert on the floor for the last possession? Absolutely. But the fact that people are arguing about the Pacers’ rim protector not being in the game with two seconds left reveals the problem itself. It shouldn’t have come to that.

The biggest issue by far in the last possession was defensive execution. If I didn’t know better, I would have thought the play was designed to funnel the inbounds option to James.

Paul George was outstanding in the second half. The Pacers aren’t in the position to win without his clutch play down the stretch. He played an excellent game. But he simply didn’t execute defensively in that final possession.  Chalk it up to growing pains.

That hurt the Pacers a heck of a lot more than Hibbert being on the bench. Why? Because there is no circumstance I can think of, with two seconds remaining, where a star like James should be able to receive the inbounds pass that easily AND drive for an uncontested layup – especially with a strong, long defender like George on him.

George over-played it – on the WEAK side of the inbounds pass no less. I can at least understand over-playing while denying the pass, only to get beat on a back door pass. But that didn’t happen here. George allowed James to get open way too easily. He overplayed the wrong side of the ball to a point that I’m not sure what he was thinking. James didn’t have to drive around him. He just drove straight to the basket. 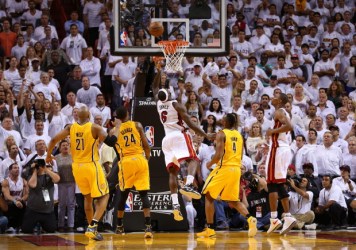 It didn’t help there wasn’t any help defense sliding over.  Once James got the ball he had no time to kick it out to a perimeter shooter. At that very moment, everyone else should have  left any perimeter player they were guarding to help converge on James. Again, there were only TWO seconds.

But with two seconds, who is expecting James to cleanly catch the ball around the free throw line and be able to drive that easily. Even if George wasn’t going to deny the inbounds past, he should have played him squared up, arms stretched straight in the air. James would then have been limited to catch, turn and shoot or one dribble then shoot. I guarantee James is surprised as anyone at how easily he was able to score. Frankly, he looked shocked.

It also didn’t help on the prior possession that James blew past George Hill for an uncontested layup that gave Miami the lead.

In an otherwise outstanding game, it was two poorly executed defensive possessions that did in the blue and gold. When the game was on the line, Paul George had to attempt 25 footers and LeBron James hit uncontested layups.

It was a great game all around. It really was. It was two seconds away from feeling like the torch had officially been passed on the from Reggie Miller era to the Paul George era. We’re close, but we’ll unfortunately have to wait for that singular, magical moment.

What we don’t have to wait for is a very good, fun, hard-working team that this city and its fan base can embrace and be proud of. We have a star in the making in George and we have the team.

The Pacers just came up short Wednesday night. They had some crucial errors. This is a series they have very little room for errors, period. But not having Hibbert on the floor during the last possession just wasn’t the main one this time.