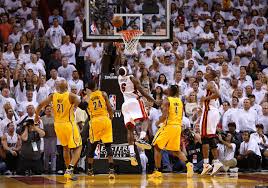 Keeping LeBron James off the rim will make talk of being down 2-0 moot.

Seven game series are great fun.  Today, Pacers fans are saying that tonight’s game is a must win, and so are Heat fans.  A loss at home, and the Pacers have their opening.  The Heat sweep the first two, and the Pacers must be perfect at home.

With a win in tonight’s game, the Pacers take control with the next two at Bankers Life Fieldhouse.  With a loss, they will have to win four-of-five against a team that will have lost only three games in their last 50.

That’s a tall order, but the Pacers franchise has been in that position before.  During Michael Jordan’s last championship run with the Bulls, the Pacers dropped the first two in Chicago.  The Bulls came into that Eastern Conference Finals having lost only one of their previous playoff games, and won both games one and two by six points.

Reggie Miller and the Pacers stared into the abyss of being down 2-0 to a team that had not lost a playoff series after Michael Jordan spent a full year with the Bulls since 1990, and they decided to fight.  Indiana won the next two at Market Square Arena by two points each.  Game Four was one for the ages, as Reggie Miller hit an off-balance three-pointer to give the Pacers a two-point lead with less than a second left, but that was enough time for Jordan to hoist a 30-footer that rattled inside the rim for what seemed like a minute-and-a-half.

In Chicago for Game Five, the Bulls tried to remove all hope by thumping the Pacers 106-87.  The Pacers won at home by three in Game Six, and that left one tilt for all the marbles.  The Pacers led by four points with five minutes remaining.  They collapsed to lose that game by five, but were only the second team to take the Bulls to an elimination game during their six championship seasons.

The Bulls had the best player in basketball history in Michael Jordan, a great defensive player in Scott Pippen (I’m not going to refer to a 47 year-old man as “Scottie” – that’s a name for a second grader who climbs trees, as in “Scottie, get down from there!  You’ll break your neck!”), and the best rebounder since Wilt Chamberlain in Dennis Rodman.

The Heat are not the Bulls, but the ’13 Pacers are not the ’98 Pacers – a veteran laden team with a great bench.  The Pacers had four starters over the age of 30, and the fourth was 29.  The ’13 Pacers have one player on the active roster older than 27 in David West.  The bench included Jalen Rose, Antonio Davis, Derrick McKey and Travis Best.

The coach for the ’98 Pacers was Larry Bird.  The team currently battling the Heat is led by Frank Vogel, who was hired by Bird.

While there are very few similarities between the two Pacers teams, but the talk in ’98 was similar.  Vince Welch was the sports director of WIBC, and he asked again and again, “How are the Pacers going to beat Michael Jordan and the Bulls four-out-of-five?”  If the Pacers lose tonight, we’ll hear the same refrain.

If they win, suddenly the control shifts to the Pacers, and this is all moot.  But if they don’t, remember May of 1998, a month when all hope was lost until Reggie threw in a three-pointer in Game Four that turned the best-of-seven into a best of three.

Whatever happens tonight, the Pacers will have at least two more bullets at Bankers Life Fieldhouse to shorten this series, but why not learn a couple of lessons from Game One and beat the Heat’s ass?