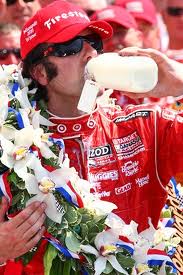 Surprisingly, the bottle of milk is not my favorite tradition at Indy for me.

Today is Carb Day.  It features the final practice prior to the running of the 97th Indianapolis 500.  RVs and tents pop up in the Coke Lot and at the corner of Camp and Brew.  A middling rock band plays for thousands of way overserved knuckleheads – this year it’s Poison.  And there is a pitstop competition that is as much for fun as for the cash award.

It’s T-minus 48 hours to the race, and the weekend long celebration commences today.

Few sporting events are as well defined by it’s history and traditions as the Indy 500.  Some are great, and some are simply continued because no one has the heart to put a stop to them.  With that in mind, here are the five worst and five best of those traditions:

The Best Traditions of the Indianapolis 500

#5 – Talk of Gasoline Alley on the ride home  Fifty years ago this week, a young movie projectionist from England named Donald Davisdon visited the Indianapolis Motor Speedway for the first time, and he fell in love with it.  He returned for good a couple of years later, and not long after was hired to host a show during May that celebrated the history of the Indianapolis 500.  Donald is still hosting the show weeknights on 1070 the Fan, taking calls from those who also love the history of the race.  Want to know why the color green is seen as bad luck at the IMS, ask Donald.  After the race, Donald hosts a marathon version of the show.  An Englishman hosting a radio show in Indiana whose purpose is to discuss the history of an open wheel race would not be my first option as a program director, but I wouldn’t change a thing.

#4 – Taps  The playing of Taps during the prerace gives the quarter of a million spectators several moments to reflect on the Memorial Day holiday weekend, as well as remember the many men who have died during the race in their quest for technological development and safety.

#3 – The Snake Pit  The stories of the mayhem in Turn One are legendary.  The Snake Pit has been gentrified a little bit, and moved to Turn Three, but it’s good that there is a place that welcomes stupidity again.  There is a lot of property on the grounds of the Indianapolis Motor Speedway, and there is plenty of room for family friendly behavior elsewhere.  Turn Three belongs to the idiots.

#2 – Coolers full of beer are welcome  During these times of $8.50 beer at sporting events, it’s wonderful for the IMS to allow people to bring in their own beer.  The decision to do that is driven by the logistical nightmare of serving 250,000 thirsty Hoosiers, but it still makes the day a cheap option for the youngsters who like to see how much they can put away before they fall down.

#1 – Jim Nabors singing “Back Home Again in Indiana  Other than longevity, there is no reason for Nabors to show up during the Mays he is physically able.  First a little primer for those younger than 40 who only know Nabors for his race day singing.  He was a breakout star on the “Andy Griffith Show” as service station attendant Gomer Pyle, and was given his own spinoff, “Gomer Pyle USMC.”  He played a sweet hayseed whose catch phrases were “Shazam!” and “Gollllly!”  His relevance as a celebrity ended with the release of the Burt Reynolds comedy “Cannonball Run”, but that doesn’t matter to race fans.  Over the decades, Nabors has become a rich part of the race day fooferah.  The crowd roars louder for Nabors than any of the drivers.

My personal favorite that is completely removed from the eyes of the fans is the way lunches during practice days are a reunion for a bunch of guys who’ve been covering the Speedway forever.  They hold court in the media dining room, and I feel privileged to be among them.  Bill York and his buddies are like the seniors in high school sitting at the cool table, while the freshmen look on in awe.

I omitted the drink of milk because it’s one of those traditions that exists only because it has been done that way in the past.  If Louis Meyer liked bourbon instead of buttermilk, they would have a cask of Old Grand Dad instead of a bottle of milk.

#5 – Local TV Blackout  There is but one event left on the sports calendar that is blacked out in it’s local market, and that is the Indianapolis 500.  The arcane thought behind blackouts is why would people pay for tickets when they can watch on TV?  As everyone else has discovered, being able to experience the event live on TV helps build brand awareness among passive fans.  People have watch parties, and might be enticed to buy tickets next year.  Kids might think it would be cool to go, and buy tickets as adults.  Hey, it’s great for WIBC and the IMS radio Network, who net a 12-rating and 65-share for the race broadcast in the Indy market.

#4 – Celebrities dropping the Green Flag  I have no problem with a guy like Jack Nicholson doing it.  He’s an icon, and that works.  When the celebrities are not anything close to household names, it damages the prestige of the event.  This year, I had to look up Michael Pena on imdb.com.

#3 – The quaint 4X3 screens facing the grandstand  That these things have been allowed to become a tradition is a shame.  At a shrine for technological advancement, these video screens are an insult.  They appear archaic, and do not represent the first class facility the heritage of the event demands.

#2 – Flashing of boobs  Don’t get me wrong, I’m a big fan of boobs – but they need to be the right boobs.  The boobs belonging to women who are happy to share them are generally revolting.  Leathery sacks of goop should be hidden under multiple layers, not exposed to innocent eyes like mine.

#1 – Florence Henderson singing “God Bless America”  I don’t want to bruise Carol Brady’s feelings, but he cannot sing.  I have heard that she used to be a musical theater star, but her wildly inconsistent vibrato is difficult to listen to.  Her pitch is terrible, and somebody needs to tell her that it’s over.  She is skipping the Indy 500 this year, so listening to her won’t be the typical chore it has been for decades.  I hope her health is good, but won’t miss her wobbly warbling.