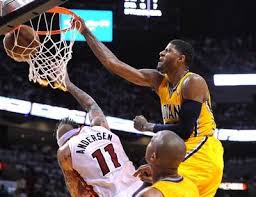 How do you beat Sunday?  The Indy 500 followed by Game One of a best-of-five with Indiana holding home court advantage will make May 26th one of the best sports days in Indianapolis since the heyday of Reggie Miller’s Pacers.

The Pacers outlasted the Heat tonight, as they were able to close the right quarter well.  After allowing the Heat to convert buzzer-beating triples to end the second and third quarters, the Pacers got gritty, and closed the game forcing two LeBron James turnovers and cashing in four throws.

This is one strange Pacers team.  Playing the World Champions on their court, they play with enough abandon to have fans scratching their heads, but just enough discipline to compete and win.

Lance Stephenson played one of the most enigmatic fourth quarters ever.  He was alternately excellent and horrific.  The rebounds and made three-pointer were huge, and the bizarre drive that led to a shot with the back of his head to the bucket were maddening.

David West was only 2-9 from the field, but 9-10 from the line.  He forced the two James turnovers in the final :42 seconds.

The bench was a problem tonight for the Pacers as the starters were all between +12 and +17, while the bench players were all negative – Sam Young leading the group with a -15.  (Plus/minus reflects the point differential while each player is one the floor.)

The Pacers were led by the splendid Roy Hibbert, who was stout offensively scoring 29 points, grabbing 10 rebounds, and hitting 9-10 from the line.  He never got into foul trouble, and kept James from getting to the rim as much as he likes to.

James was good until the final three of his 45 minutes of action, hitting 14-20 from the field toward his 36 points.

The Pacers did what was necessary to win this game – limit turnovers, and hit fouls shots.  From the line, the Pacers were an outstanding 26-32, and they only turned the ball over 13 times – even though it seemed like many more at times.

So now we are going to see the media shift from “the Pacers are done” to “the Miami Heat have their backs against the wall.”  Frank Vogel will go from being a goat in Game One to a genius in Game Two.  Paul George has now been annointed a superstar, after being called soft in Game One.  James went into both games as the acknowledged best player in the world, and he leaves with any sane person believing the same thing.

The officiating likely fades as a story because the Pacers won.  Had they not, Pacers fans would whine about the three technicals forever, and rightly so.  The Heat led the Pacers in fouls 27-23, and the Pacers outscored the Heat from the line by eight points.

This is shaping up to be a hell of a series.  People expect the Heat to wake up and overwhelm the Pacers, but at every point have the Pacers been able to answer the haymakers Miami lands.

Both of these teams are well coached, and play at the ragged edge.  There is seldom meaningful separation between them.  Tonight, the Pacers 11-point lead became six in the final :46 of the first half, after Iam Mahinmi, Sam Young, and Orlando Johnson reported for Hibbert, George, and Stephenson.

But the Pacers always answered, and they were able to bring home what they sought, a win to steal home court advantage.

My thoughts tonight kept wandering to Larry Bird, who built this team to compete with the Heat, because if a team can’t do that, they can’t win the East.  The matchup problems presented by West and Hibbert are going to be difficult for the Heat to overcome.

The Pacers have an advantage over the Heat in addition to three of five being played at Bankers Life Fieldhouse.  They are considerably younger.  Only David West is older than 27 for the Pacers.  The only rotation players 27 or younger for the Heat are Mario Chalmers and Norris Cole.  Ray Allen (37), Shane Battier (34), Chris Anderson (34), Udonis Haslem (32), Dwyane Wade (31), Chris Bosh (29), and James (28) are going to have a tougher time rebounding in 48 hours as the series progresses than will the younger Pacers.

One concern is that the Pacers will spend too much time listening to and believing what they hear from the media.  I work in the media, and I can say with all confidence that participants listening to the media – good or bad is a damaging distraction that should never be indulged.

The team with the best focus will win Game Three, and veterans who have been there have an advantage in that area.

In other words, I have no damn idea what will happen in Indy on Sunday and Tuesday.