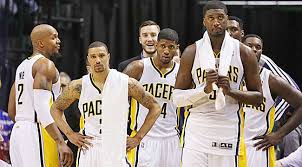 The Pacers had many excellent reasons to look grim tonight as the Miami Heat took a 2-1 series lead.

It was the kind of night at Bankers Life Fieldhouse that Indiana Pacers fans might have remembered for a decade.  This was a game that could have defined the franchise’s upward direction for long suffering fans who will be targets for season ticket sales during the off-season.

Those who remember it will wish they didn’t, and sales pitches to ticket buyers are not going to be positively answered – at least not because of this game.

The Pacers looked like they started to believe their own press clippings written after a good, not great, performance in Miami.  Paul George was called over to talk to the TNT crew that includes Kenny Smith, Shaquille O’Neal, and Charles Barkley, and those three gushed over the blossoming of a beautiful basketball flower.  A superstar was born Friday night, according to Barkley.

One thing I know is true about the media and what they say – smart people don’t listen to it.  Good or bad, no stock whatsoever should be put into their insight.

I don’t know whether George took the high praise to heart, but he sure was beaming with pride as he was told how great he was.  He appeared tonight to be a guy who thought that he had educated the Heat about the wonderment of his talent, and that they should simply accept their medicine with grace and return to Miami down 3-1.

It’s unfair to say that George was the only reason that the Pacers gave up a mind boggling 70 points in the first half, but because of his becoming the Pacers messiah on Friday, his lack of verve was especially obvious.

During the third quarter, the Pacers showed signs of life, drawing to within seven and with possession.  The Heat awakened to go on an 11-2 run, and finished the quarter up 15 points – 91-76.

At the point when pacers coach Frank Vogel emptied the bench with just over three minutes left, the Heat had hit 55% from the field and committed only four turnovers.  For the first three quarters, the Heat hit at a better than 60% clip.  During the first half, the Heat committed a single, solitary, lonesome turnover – a Ray Allen travel that had very little to do with the Pacers defense.

That does not reflect the level of defense that is required of a championship team night in and night out.

They say that youth is wasted on the young, and the Pacers wasted an incredible opportunity tonight to put the Heat on the defensive.  There is a definite correlation between maturity and consistency, and it takes consistency to win a seven-game series against a championship caliber team.  Michael Jordan was unable to win a championship until he turned 28.  LeBron James was 27 1/2 last June when he earned his first ring.

The only active Pacer older than 27 is David West, and sadly the only way to learn some lessons is through making mistakes, and I’m not stepping out on a limb by calling tonight’s lethargy a mistake.

This big day in Indianapolis sports history was executed half right.  Tony Kanaan won the Indy 500, and that’s a just result for a really good man.  The Pacers played with a lack of passion and focus, and the Heat beat their asses in the way a championship team should coming off a defeat.

The Heat annoy basketball fans because they refer to themselves as great, when they are not.  Not only aren’t they great, they aren’t the better team in this series when the Pacers played ferocious defense.

On the plus side, the Heat didn’t score another 70 points in the second half, but the Pacers weren’t nearly effective enough to make tonight’s game a contest.

So now the task becomes a must win game on Tuesday against a team with a 2-1 lead, and then stealing another game in Miami.  It’s possible.  Anything is possible.  But the Pacers need to realize just what the hell is at stake during each and every possession.  They can win an NBA Championship, or choose to feel good about another step in the right direction.  There can be no hubris for this young team.

The answer is the same whether a team is successful or not – hard work, focus, and love for one another.  And don’t forget to ignore the media – whose breakdown of this turd will be as negative as the superlatives after Game Two were positive.