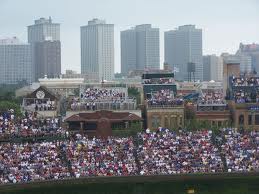 “The enemy of my enemy is my friend” appears to be a phrase near and dear to the hearts of the Wrigley Field Rooftop Association.  They email their literature to me on a regular basis, and appear to have misjudged my feelings toward them.

The Cubs business office is run by an arrogant mope named Crane Kenney, whose work I do not respect.  He’s an evil bean counter, and his efforts sully owner Tom Ricketts’ reputation.

Both claims are ridiculous as the Cubs historic woes have nothing to do with the facility, and everything to do with a farm system that has with few exceptions been bereft of both talent and effective instruction.

The second claim is completely nuts because without Wrigley Field, the Cubs would draw like the Kansas City Royals.  The Cubs building a stadium in the suburbs would be like moving the Rockettes performances from Radio City Music Hall to the White Plains Performing Arts Center.

I loathe the idea of video boards at Wrigley Field because it violates my notion of what the place should look like, and I am not a fan of people who try to squeeze every possible dime from an asset without regard for history or aesthetics.

That does not make me a fan of the Wrigleyville Rooftops Association.  It used to be a quaint pleasure to stand on the rooftops with a friend or two who lived there to watch a big game, and then the building owners got smart.  If people will pay to sit in upper deck seats no closer to the field at other stadia, why wouldn’t they pay to sit on the roofs?

Throw in some cheap beer, burgers, and dogs, and the building owners were sitting on a bonanza.  Never mind that they paid nothing at first to the Cubs for what in essence was the theft of their product.  Now, they pay 17% of their gross revenue as part of a 20 year deal signed in January, 2004.

Okay, fine, everyone gets paid, but I’m no fan of anyone in the land rush to profit from a baseball team that has been disemboweled in front of its fans’ eyes.

The only explanation for people continuing to attend Cubs games is a love of expensive Old Style, an ignorance of what good baseball looks like, and an indifference to ticket prices used to defray expenses that defy logic and belief.

Alfonso Soriano will suck $18 million from the Cubs both this year and next, and that means every fan who pays what is reported to be baseball’s fifth highest prices will continue to defray that witless expense authored by former general manager Jim Hendry, whose poisonous dealmaking will be felt at the corner of Clark and Addison for another generation.  But I digress.

The rooftop profiteers responded to the Cubs erecting mockups of their massive video boards today, “We appreciate the Cubs’ willingness to demonstrate the impact of their sign plan.  We were shown several options today, which we will verify with the permit applications they have submitted to the City of Chicago.  We know one thing for sure: Signs on the rooftops have no obstruction to our patrons’ views and remain the best solution to provide sign revenue to the team.”

Why the hell anyone outside of the fraternity of rooftop owners would see signage on the rooftops to be “the best solution” requires significant further explanation, and the tone of the comment as smarmy and wrong.

When your opponent is willing to reveal himself as an asshole, be the nice guy and win the public.  Don’t try to out-asshole the asshole.

I know one thing for sure, rooting for either side in this signage dispute is as stupid as the two sides are arrogant.