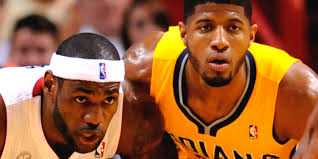 There will be eight other guys on the floor tonight, but LeBron James and Paul George will tell the tale.

The constant din of “must-win game” chatter during the analysis of every playoff series is aggravating, and most of the time it’s way premature.  If the Indiana Pacers do not win tonight, they will be forced to win three straight to advance to the NBA Final.  That would seem to be a tough road against a team that has lost only four games since a February 1 loss to the Pacers.

But it doesn’t make tonight’s game a must win.  The Pacers are going back to Miami, where they were one defensive stop against LeBron James away from going up 2-0.

Despite a very small sample of one game at Bankers Life Fieldhouse, it can be said the Pacers have played with more tenacity and focus on South Beach than at home.

They need to grow up tonight, understand their situation, and take this Game Four from the Heat if they want to take another step forward, but as long as the Heat have not won four games in this series, the Pacers are still alive, and alive is dangerous.

The problem is that satisfaction can creep into the psyche of a young team, and the Pacers are really young with one active player on their roster over the age of 27, while the Heat have only Norris Cole and Mario Chalmers as rotation players who are 27 or younger.

Experience tends to win in the NBA Playoffs because only losing can teach a player about the motivation of misery aversion.  Michael Jordan won his six rings because of the two the Chicago Bulls lost in Eastern Conference Finals to the Detroit Pistons in 1989 and 1990.

The sting from those losses motivated Jordan to work tirelessly, force his teammates to work harder than they would have otherwise, and vanquish all threats for the next three years.  Then Jordan got bored, played baseball, and came back to win another three straight.

The Pacers will either show an understanding that losing is so painful that playing like wild men hellbent on victory is a better option, or they won’t.  If they come out tonight with focus, the Pacers not only can beat the Heat – they should beat the Heat.

Because the Pacers are a better team, this series comes down to being professionals and knowing the level of consistent effort it takes to send home a tournament tested team.

The Heat are a soft group unable to muster their best effort on a regular basis.  They have the two most gifted players in the NBA, but Dwyane Wade is dinged up and unable to play to his potential.  LeBron James has physical abilities unmatched in the history of the game, but his psyche can be weak and easily exploited.  James doesn’t need to be crazy to win, and so he’s too sane to be the champion Michael Jordan was.  That’s a problem for the Heat.

Paul George needs to decide whether he’s simply a very good player, or a champion.  George can’t afford to play like he did Sunday, and whatever it takes for him to be at his best is what he needs to do for the Pacers to win.

For an athlete like George, being good and making $100 million is going to be easy.  Working to the threshold of pain will be enough for him to be an all-star, but he will need to sacrifice his body to earn rings.  That’s the point of differentiation between champions like Jordan and guys like Rod Strickland who were never able to win anything despite being good.

George and James will play for their legacies tonight, and the guy who takes that most seriously will win tonight.  The loser should stare at himself in the mirror and dedicate himself to working so hard that that sting of defeat will never be felt again.

History would suggest that this playoff series will be a stepping stone for a young team like the Pacers to better things, but two other outcomes are almost as likely – that the Pacers will win this series, and that getting this far will satisfy the Pacers and they will vacation rather than bust their asses to earn a more successful result.

That’s up to George, and unless the Pacers rally to win the series, we won’t know the answer – maybe for years.

Tonight’s game is not a “must win”, and the legacy of this Pacers team will be written because of the response to this postseason, not the result.

And the response from George to praise from Shaq and Barkley the next time he’s interview should be, “Put your tongues back in your mouth, I haven’t done a damn thing yet.”  That is unless the next time is after the Pacers beat the Spurs in the NBA Finals.