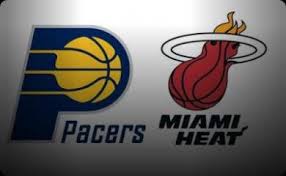 Well that was entertaining, wasn’t it.  NBA games take a long damn time with replays being checked every 12 seconds, but there are nights like tonight when they are worth it.

There was a critical moment with the Pacers holding an 81-72 lead with 8:26 left when the Pacers made what looked to be a tip-in after a Roy Hibbert shot glanced off the rim with the shot clock running down.  Somehow all three officials missed the shot hitting the rim, and the tip did not count.  The shot clock violation led to Lance Stephenson picking up his fifth foul of the game, and was followed by a Heat 14-2 run.

At 86-83, the Pacers looked to be on the brink of cashing in their chips, and hopping on the plane to South Beach for a game that would send the Heat to the NBA Finals.  Not so fast.

The Pacers showed their new found maturity with 5:37 left as Paul George converted a traditional three-point play to stop the bleeding and tie the game at 86-86.

A Stephenson jumper was followed by two layups by Roy Hibbert, the second accompanied by James’ fifth foul to give the Pacers a five-point lead they would relinquish in part because 34-seconds later, James notched foul #6.

And so the Pacers and the Heat are looking at a best of three series to earn a trip to the NBA Finals.

There are many reasons that three of the last six Heat losses have been at the hands of the Pacers.  Hibbert played an exceptional game, and Stephenson is a mercurial beast who is so thoroughly unpredictable that he’s virtually impossible to defend.

On a night when every Pacers starter scored in double digits, Stephenson and Hibbert combined for 43 points on 19-31 shooting, including a Stephenson fade-away three-pointer to end the third quarter after James committed a bonehead offensive foul on the Pacers end.

The Pacers outrebounded the Heat 49-30, and that was an absolute necessity because the Heat only turned the ball over six times, and made 24-27 of their foul shots.

This was not a matter of the Heat playing like idiots – minus Chris Bosh who has been thoroughly thrashed on both ends by Hibbert.  They didn’t shoot it as well as they did Sunday night, but they took great care of the ball, and got an unexpected 20 points from Mario Chalmers.

So the series moves on to Miami for Game Five Thursday night, where the Pacers will try to fight their way through the best player in the world to bring the series back to Indy on Saturday for a clincher.

It’s damn hard to beat a guy like James four-out-of-seven, but anyone can take two-of-three, and that’s now what this Eastern Conference Finals has become.