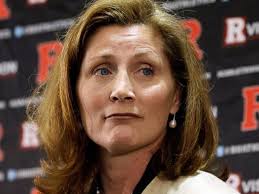 Soon-to-be Rutgers AD Julie Hermann is accused of calling her players “whores, alcoholics and learning disabled,” while a volleyball coach at the University of Tennessee.

Julie Hermann is accused of calling her University of Tennessee volleyball players “whores, alcoholics, and learning disabled,” before she resigned as coach 16 years ago.  People aren’t perfect, but at a place trying to emerge from scandals, the behavior she displayed should DQ her as a candidate for an AD job at a Big Ten school.

But it didn’t at Rutgers University.

At some point, a question needs to be asked and answered about Rutgers president Robert Barchi’s fitness to lead.  The past three months have not been pleasant for anyone associated with Rutgers athletics or the university.

Basketball coach Mike Rice was fired after hours and hours of videotaped practices where Rice was physically and verbally abusive to players were given to the media.  The videos had been reviewed in November by athletics director Tim Pernetti, and the result after consultation with higher ups at the school was to suspend Rice and require anger management counseling.

When media pressure led to the removal of both Pernetti and Rice, Rutgers turned to one of its own to lead the basketball program.  Eddie Jordan accepted the job, and Deadspin discovered that Jordan never graduated from the university – as both he and Rutgers claimed he had.  Jordan received a distinguished alumni award in 2004, but not a degree.

Today, reports surfaced that Julie Hermann, the athletic director hired to replace Pernetti, resigned as volleyball coach at Tennessee 16 years ago because of a player uprising against her.  The former players claim that Hermann corrupted their love of volleyball through physical and psychological abuse not unlike Rice’s.

Prior to Hermann’s hire, Rutgers administrators looked like the gang who couldn’t shoot straight.  Now, they are the Keystone Cops.  Every move Barchi makes is investigated with more vigor and success by the media than by his own university.

All managers make a bad hire now and again, but few keep their jobs after a run of incompetence this squirrelly.

To add insult to injury, Hermann has claimed no knowledge of the damning letter sent by her team claiming that she called the players “whores, alcoholics, and learning disabled.” that resulted in a meeting with the players, Hermann, and the AD where Hermann decided to resign.  She now claims no knowledge of the meeting and letter, and denies calling her players “whores, alcoholics, and learning disabled.”

The former players have expressed their anger over Hermann claiming not to have said those words or to have participated in the meeting.

If not for the hundreds of athletes entrusted to the care of Rutgers, this would be funny.

But this isn’t an episode of “Charles in Charge.”  It’s pathetic that a man whose chief responsibility is to create an environment where all students can safely be shepherded from adolescence to adulthood is unable to use google (or his own registrar’s office) to corroborate claims made on a resume’ or discover serious character issues among those hired to be leaders at Rutgers.

It’s certainly possible that Hermann has matured and would serve as a fine athletic director, but claiming to not remember a letter signed by her entire team damning her leadership as well as the meeting that led her to resign is deceitful, or evidence of brain injury.

There must be people in athletics who haven’t stepped on a land mine  in their careers or have no reason to lie about their present or past.  It’s hard to believe that Rutgers can’t find any of them.

Barchi has said in a statement, “We remain confident that we have selected an individual who will work in the best interests of all of our student athletes, our athletics teams, and the university.”

Not only does this run of dumb luck and poor work make Barchi look like the ringmaster of a shoddy circus, it reflects poorly on New Jersey Governor Chris Christie, who would like one day to preside of the executive branch of America and to nominate the secretary of state, attorney general, secretary of defense, and all other cabinet positions.  If he can’t manage to corral a competent person to run a state university, how can Americans trust him to hire and lead a staff where the stakes are significantly higher?

In this test of leadership, Barchi has failed miserably, and Christie’s grade is incomplete.  The hog is in the tunnel, and it’s time for Christie to decide whether it’s him.