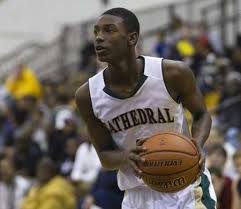 For decades, people have accused Cathedral High School of making the financial burden of attending a little lighter for the families of great athletes who attend the Indianapolis school.  Today, one of the best basketball players to come through in years told school officials he will transfer for financial reasons.

[Full disclosure – my son attended Cathedral, earned four varsity letters as a basketball player, and was first team All-City twice.  He was awarded a $1,000 annual scholarship because of his entrance exam scores.  Not only did he not receive a dime to attend, the coach at Cathedral at the time never saw Ryan play, much less recruit him.]

Jalen Coleman will attend La Lumiere Academy in LaPorte, Indiana, which is not an IHSAA member, so they can offer whatever they like to whomever they like to attend and play basketball.  The tuition and room & board for one year runs roughly $35K, and Coleman’s brother also gets a full ride.  Two years of Jalen, and four years of little brother, and we’re talking $200K worth of education.

Cathedral’s counter offer – nothing.  They don’t pay their athlete’s tuition unless there is a financial need that allows them to help, but there is nothing wrong with helping a family in need unless it is done for athletic reasons.

Public school parents and coaches loathe Cathedral because of their success.  They claim that Cathedral has an unfair advantage because they are able to attract students from all over, and offer them incentives.  Half true.  Cathedral has no boundaries.

And Jalen’s departure from Cathedral should end all the squawking about tuition payments for special athletes.

Here’s Jalen talking about losing his last game in a Cathedral uniform – the state championship game against Carmel: