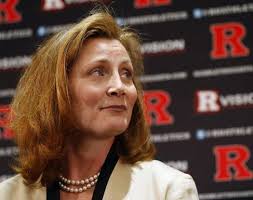 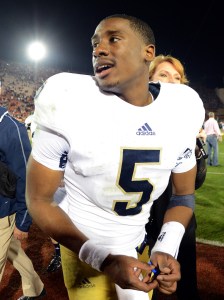 work a single day as the athletic director at Rutgers University.  In the other corner – a 20 year-old quarterback who has been suspended as a student for the fall term from Notre Dame because of academic misconduct.  One has owned a mistake, and the other has obfuscated, dodged, and lied.

Wouldn’t you hope that Julie Hermann, the person entrusted to provide a safe and rewarding environment for hundreds of student-athletes at Rutgers, would be the person who set a decent example and accepted accountability for her mistakes?

Golson released a statement as a result of his suspension, “I have been informed by the University of Notre Dame that due to my poor academic judgment that I have been suspended from the university for the 2013 fall term.  I take full responsibility for my poor choices and will do all that is asked of me to regain the trust of my family, friends, teammates, coaches and the entire Notre Dame community.

“My parents and the community I grew up in have instilled values in me that have and will continue to allow me to be successful in the future.  There have been many lessons learned as I worked to become the starting quarterback at Notre Dame, and each was a result of coach Kelly’s belief in me as an athlete and a person.

“At this point, I understand how my integrity could be in question, but I want to reassure my supporters that through this experience I will return a better student athlete as well as a better individual.”

I believe that he will emerge from this a better person, but given his contrition, he’s already leaps and bounds ahead of the supposedly more mature Hermann, who had no recollection of a wedding for a coach she subsequently fired for becoming pregnant, according to the coach.  Hermann also guaranteed that there was no video of her saying that the coach better not become pregnant by saying during the press conference announcing her hiring, “There is no video, trust me.”

Those statements came despite Hermann serving as a bridesmaid in the wedding, and the video in question being entered into evidence during a wrongful dismissal lawsuit filed by the bride/coach for whom Hermann stood.

Hermann also claimed to have no recollection of a meeting with her athletic director and team when she served as a volleyball coach at the University of Tennessee.  It was during this meeting, according to members of that team, that Hermann quit as coach.

The meeting was prompted by a letter from the entire team that served as a list of grievances against Hermann and her abilities and methods of leadership, and ended when she left after saying she would no longer coach the team.

Coaches might not recall much other than the losses that gnaw at their souls, but they sure as hell remember a mutiny that results in their resignation.

Whether Hermann was an abusive coach or not in 1997 isn’t an issue, but her lack of willingness to accept the truths as presented through some fairly routine media scrutiny shows an outrageous lack of character.  It also shows Rutgers University as a slapdick operation that hires to major positions without any look into the background of its applicants after a period of controversy rivaling some of the most troubling in recent memory.

Hermann could have very easily said, “Look, in becoming the leader I am, some mistakes have were made.  Those mistakes have made me the person I am, and will help me manage coaches away from the behavior that crosses the line between leadership and abuse.  I fired an assistant coach who was underperforming.  She happened to be pregnant, and there was a video where I was a little bit flippant about the potential for her to become pregnant.  Her termination wasn’t about pregnancy, but my attempt at humor will ill-timed.”

End of story, but no, she took the deceitful road, so the story continues to roll, and probably won’t stop until both she and Rutgers president Robert Barchi are crushed by it.

The 20 year-old gets it.  He owns it.  The 49 year-old does what many administrators always do – duck and cover.

If I were in a position to hire one or the other – I’m offering the job to Golson.