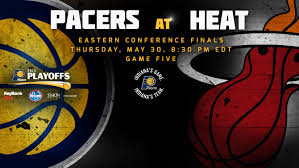 It’s 60 minutes prior to the tip of a game that will likely determine the outcome of the Eastern Conference Finals, and all that’s left to do now is play the damn game.

The Pacers and Heat know each other well enough to be good and pissed off about the behavior of the other, and the officiating has both fan bases equally upset.

Regardless of the extraneous fooferah, the game will be won because one of these teams will put the ball in the bucket more often than the other.  Equally important will be the defensive ability of both teams to keep the ball out of the bucket on the other end.

So what are the keys to this contest?

Interestingly, the irrefutable statistical truth is that when George Hill and Lance Stephenson enjoy nights when they hit shots well, the Pacers win.  If Hill’s effective field goal percentage (the effective FG% factors in the extra point when shots are taken from beyond the arc) is 35% or better, the Pacers are 9-2 in the postseason, and 2-1 against the Heat.  When it’s below 35%, the Pacers are 1-3, including 0-1 vs. the Heat.

That’s not conclusive, but it is an interesting bellwether.

How about some Dwyane Wade numerical love?  When Wade hits more than 50% of his shots, the Heat are 6-0, but only 3-3 when he doesn’t.

It appears not to matter what the hell LeBron James does.  He scores a bunch – the Heat win and lose.  He shoots a lot or less, doesn’t matter.

So based on the skinny evidence available from 13 Heat games and 16 Pacers tilts this postseason, we know that for the Pacers to win:

In basketball terms, what the hell does all that mean?

Obviously, a bunch of other stuff must happen, but after hours of looking at the statistics, the other stuff appears not to lead definitively to a win or a loss.