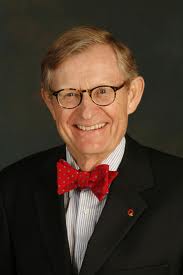 Gee looks like the smiling spawn of late senator Paul Simon and comic actor Orson Bean, but he’s less funny than either.

I’m an Irish Catholic, and I could give a damn what the presider of The Ohio State University thinks about the Irish, Catholics, or Notre Dame.  He’s a pedantic administrator who has decided he’s clever because he’s the king of a puny hill.

Of course, E. Gordon Gee isn’t clever, funny, or without significant flaws of his own.  This isn’t his first meal of feet.

Gee told a meeting with athletic administrators, “The fathers are holy on Sunday, and they’re holy hell on the rest of the week.”  He continued, “You just can’t trust those damn Catholics on a Thursday or a Friday, and so, literally, I can say that.”  The assorted boobery got a good laugh out of that, or humored Gee with their response.

Gee didn’t just insult Catholics, he hammered Louisville and Kentucky too.  He said that Big Ten expansion will only include like-minded academic institutions, “so you won’t see us adding Louisville,” and then said they wouldn’t add Kentucky either.

I’m sick and tired of everyone being held to an incredibly high standard of political correctitude, but Gee’s comments almost always seem less than “presidential.”

Stand-up comedians are in danger of Gee stealing their gig in the same measure Gee’s job is threatened by Don Rickles.

Gee is going through some measure of university ordered remediation.  I assume that means he is watching DVDs of Richard Pryor and George Carlin and is given a painful shock every time he laughs.

Catholics have survived much worse than the unfunny rantings of man running a university whose greatest honor is to dot an i.  I think we’ll make it through this without much sorrow.