There was controversy before the NBA’s Eastern Conference Finals started.  Indiana coach Frank Vogel said that the Heat are the team that is next.  Someone told LeBron James that Vogel said the Heat “are just another team.”  James took umbrage and claimed that the Heat “are a great team.”  Even if Vogel had said what was reported to James, this series has proven that he was right.

There are plenty of statistical reasons that the Heat are favored to win tomorrow night’s Eastern Conference Finals Game Seven: 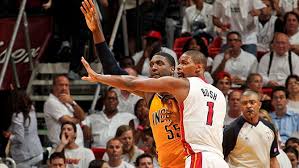 Coming into this series, given a choice between Chris Bosh and Roy Hibbert, most would have taken Bosh. Hibbert has cleared that debate up nicely.

And the math might be right.  LeBron might go off like he did in the third quarter of Game Five.  A lot of things might happen, but here is what we know about the Heat – they have been taken to a game seven by the Pacers, a young and brash group that defends well, but does a terrible job of taking care of the ball.

Paul George committed six of the Pacers 21 turnovers last night, and the Pacer still won by 14.  Great teams do not lose to a group that turns the ball over 21 times.  Great teams smell blood in the water when the emotional heartbeat of the team is as sick as David West was.

The Heat are not without their excuses.  Dwyane Wade is undoubtable hurt.  I saw Wade score 22 points in the first six minutes of a game in Indianapolis on February 15th, 2011.  That was the game where James and Wade executed a full-court alley-oop that still can’t be believed.  I saw basketball plays that night I have never seen before.

What can’t be believed now is that Wade is the same person who authored any of that brilliance.  He’s been less than ordinary in this series, and the sight of his Mom rubbing his injured leg, well, if she has healing powers, that’s fine.

As for Chris Bosh, he was never in the league of James and Wade as a member of this Big Three, but that’s no disgrace.  He was a very good player when he signed with the Heat, but never spectacular.  But in this series, he’s been ordinary at best.  His five points last night was an all-time playoff low.

It’s taken some outstanding games by non-Big Three players like Udonis Haslem and Mario Chalmers to help the Heat extend this series to seven games.

None of the above contributed anything but misery last night as the “Other Four” knocked down only 7-of-29 shots, and Bosh and Wade combined for an all-time low 15 points.

It comes down to a 48 minute game, and the team that was nothing more than a speed bump on the Heat’s road to destiny in the eyes of the national media has a good chance to advance to the NBA Finals if they can continue to assert their will defensively and attack the rim on offense.

But regardless of tomorrow night’s outcome – or their performance in the finals – the only greatness on that roster now belongs to the guy wearing #6.

This is a great series being contested by two good teams.  May the best team win, and that designation is still very much in doubt.