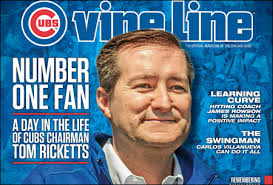 “Oh, you think you’re the number one Cubs fan? Well I have a magazine that says I am.”

There have been times in the nearly four years he has owned and operated the Chicago Cubs that fans and media have questioned Tom Ricketts competence.  So many flaws are obvious in the onfield product that fans who filled Wrigley relentlessly for a decade are finally deciding to stay home.

People said for years that you couldn’t keep fans out of Wrigley if you beat them away with a bat.  Well, you can if that bat swings and misses with runners in scoring position with as much regularity as the Cubs do.

Now, Ricketts is on the cover of his own fan rag, and the headline declares that he’s the “Cubs #1 fan.”  The strategy behind this must be awful, although I can’t imagine what it is.  It seems similar to that of Lloyd Bridges’ character Izzy Mendelbaum on “Seinfeld”, who wore a shirt emblazoned with “World’s Greatest Dad” to prove the he was the world’s greatest dad.  What prompted this absurd ode to a billionaire whose smile 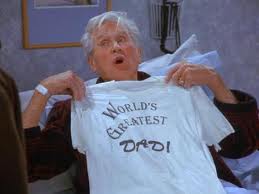 looks more like a grimace is anyone’s guess, so I made three:

That Ricketts sees his continued branding as a great fan of the team he owns, rather than the owner of a team with great fans as positive for the Cubs, the Ricketts, or baseball in general shows a growing dissociation with reality that would baffle a panel of Freud, Jung, Joyce Brothers, Dr. Phil, and Deepak Chopra.

The bizarre regular guy routine isn’t just an insult to the intellect of the fans, but an affront to rich people in general.