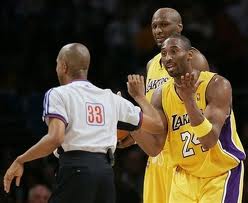 Bob “Slick” Leonard has made a living from playing, coaching, and describing professional basketball for almost 60 years, so when he talks, the NBA should listen.

What Slick wants is for the constant kibitzing between players and referees to stop, and he’s right.  The jabbering to officials does nothing to enhance the game or the image of the players.  It’s not just annoying – it creates an unfair advantage for the stars of the league who are already treated differently than the ordinary players.

The greater the relationship that is formed between a star player and a ref, the better whistle the player is going to get.  Liking a player should not be an option for the refs, and human nature dictates that the more two people communicate, the more favorable the player will be viewed.

Human beings aren’t machines, and all but sociopaths want to be liked at least a little bit.

Secondarily, it’s damn annoying to see players whine constantly, especially when they’re multi-multi-millionaires.  It’s untoward to gripe about a charge/block call with over $100 million in the bank, particularly when it’s done while a player should be hustling back on defense.

NBA players need to look a hell of a lot less like spoiled brats than they do currently.

I’m not looking to turn NBA players into even-tempered eunuchs, just penalize them for their acting like fools and attempting to gain an unfair advantage.

Like most ideas from Slick, this is a keeper.