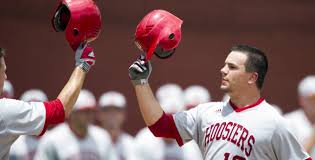 The Indiana Baseball party will move from Tallahassee to Omaha next weekend.

Forget the Miracle on Ice.  Super Bowl III when the Jets stunned to Colts was nothing.  The Milan Miracle pales in comparison.  Indiana going to the College World Series is the most unlikely happening in the history of organized athletics.

This Hoosiers team is really good, but the historic mediocrity (I’m being kind) of Indiana baseball makes this event Powerball winning weird.

I always thought that it was more likely – much more likely – that Indiana University would find its way to a Rose Bowl long before it qualified for a trip to Omaha.

The great Paulie Balst has always promised his kids he would take them to Omaha if Indiana ever qualified.  At the time, he thought it was more likely he would have to make good on a similar promise to load them into the family rocket for a trip to the moon, if the technology ever allows Jetson-esque vacationing.

Having not won its last Big Ten regular season crown since the Hoover Administration 81 years ago, the Hoosiers have found some magic and have seen a remarkable resurgence in their baseball program that has come within three months of the opening of Kaufman Stadium.

You can almost hear the years of pleading from coach Tracy Smith to athletic director Fred Glass, “If you build me a stadium, I can get us to the promised land.”

This isn’t only incredible because it’s Indiana, but because a Big Ten team will be among the Elite Eight to play for the national championship in Omaha.  The last Big Ten representative to play in Omaha was Michigan in 1984 as Ronald Reagan and Walter Mondale were in the process of wrapping up their parties’ nominations for president.

Until this year, Indiana had won one NCAA tournament game ever, but have won five straight this season to quintuple that total.

Indiana will play the winner of the Super Regional between Louisville and Vanderbilt.  Games from Omaha will begin on June 15th, and the double elimination tourney will wrap up on June 25th or June 26th.

As with all double-elimination brackets, it’s it’s way too complicated to try to explain.  I recommend clicking on this link for details, and then booking flights to Omaha because if history is any guide, this won’t happen again in your grandchildren’s lifetime.