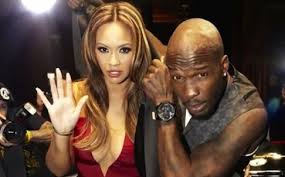 I googled “domestic tranquility antonym” and look what picture popped up. Our couple of the day – Chad and Evy!

Evelyn Lozada was engaged to former NBA star Antoine Walker, now bankrupt after earning $108,142,015 during a 13-year NBA career.  She was also married for one month to Chad “Ocho Cinco” Johnson, who was sentenced to thirty days in jail today for acting like a tool in a Broward County (FL) courtroom.

This woman either attracts idiots like moths to a flame, or she turns them stupid with her vexing female wiles.

Whichever the case, I would enthusiastically avoid her if I were a professional athlete.  Her attention would indicate that I either am a dope, or will soon become one.

Lozada is one of the star of “Basketball Wives” on VH1, as if athletes needed another reason to rebuff advances.  Nothing smells of danger like dating a reality series cast member.

As for Johnson, he had a plea deal worked out that would have kept him out of the pokey until he was asked by the judge whether he was happy with his representation.  Johnson responded by whacking his attorney on the ass.

“I don’t know that you’re taking this whole thing seriously. I just saw you slap your attorney on the backside. Is there something funny about this?  The whole courtroom was laughing. I’m not going to accept these plea negotiations. This isn’t a joke.”

So, as is always the case when knuckleheads collide, there are lessons and laughs to be had.

My heart is broke 💔

The laughs always come when bad things happen to others, and this qualifies in so many ways, I get dizzy thinking about it.