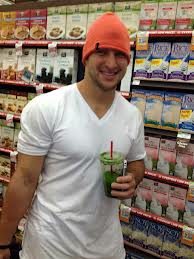 Tim Tebow buys his wheat grass one blade at a time, just like the rest of us.

What Tim Tebow will do for the Patriots is anyone’s guess.  He could be an H-back, a tight end, a fullback, a change of pace wildcat option, or a defensive tackle long before he is going to threaten Tom Brady for playing time.

Any other team would have brought the unending barrage of questions to the coach, GM, receivers, and damn near everyone else involved with the organization.  With the Patriots, Belichick don’t play that.

Tebow will show up ready to work, and Belichick will be ready to teach.  And ESPN will be there with its cameras because for reasons having to do with shared religious beliefs, people cannot get enough news about the discarded Florida Gator.

No one has ever questioned Tebow’s character or leadership, but his ability to deliver a consistent ball has been in doubt since he was drafted in the first round by the Denver Broncos.

Tebow’s career as a starter began with a bang as he won eight of his first 11, but as defenses adjusted, the Broncos lost four-of-five, including two playoff games.  Last season was spent with the Jets, where he played sparingly behind Mark Sanchez before being released at the end of the season.

If the constant media din surrounding the recently mediocre Patriots wasn’t loud enough for you last year, this signing should take it up a notch.