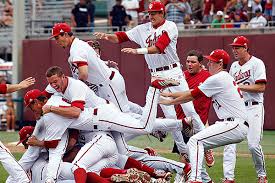 Indiana celebrates the sports equivalent of landing a manned spaceship on the surface of the sun.

The Hoo-Hoo-Hoosiers are going to Omaha as one of eight college baseball programs with a chance to win the national championship, in one of the most improbable turnarounds of a collegiate sports program in the history of the NCAA.

Indiana Baseball hasn’t been routinely bad, but given the scarcity of the eight spots for teams in the event, earning a slot is one of the toughest accomplishments in sports.

Northwestern has never gone to the NCAA Basketball Tournament, and there are 68 teams invited to play.  The Big Ten hasn’t had a school make it to the CWS in 29 years.

In 1984, the last time a Big Ten team went to Omaha, I was a student at IU.  Several friends and I put together a list of the ten events that would have to occur before Indiana Baseball got its ticket punched for the College World Series.  We hit nine, but the Cubs refused to cooperate.

The ten predictions from these latter day Nostradumbasses:

If only we had used our talents for something positive.