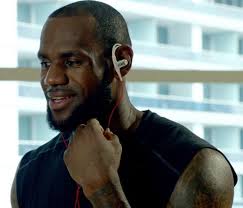 “Hey, Dre, I gotta finish getting my ass kicked by the Spurs.”

Talk radio hosts need to talk about something during the off-season, so there are inevitable discussions comparing players of different eras, because LeBron James is the best player since Michael Jordan, those two are examined.

Last night, as I watched the San Antonio Spurs destroy the Miami Heat, I thought about two things – how LeBron James looked ordinary in a Finals game in a way Jordan never did, and whether LeBron pays any attention to how badly he’s portrayed in the new Neon Power Beats commercial when he puts Dr. Dre on hold while he finishes a workout.

Not only did LeBron James score 15 points with no free throw attempts last night in a passive effort that hung his team out to dry in a pivotal game three, his record as a scorer in 18 NBA Finals games pales in comparison to Jordan’s in 35 games.

Here are some statistics:

Jordan played in his last NBA Finals 15 years ago, so no one under the age of 20 remembers seeing him play under the bright lights.  Not only did Jordan have great moments that made him an icon, he almost never failed to exceed expectations when the pressure was on.

Jordan’s Bulls went 6-0 in finals, while LeBron’s teams are 1-2 with a very real chance of being 1-3 this time next week.

While ESPN drools over a simple James’ block on Tiago Splitter’s attempted dunk in game two, Jordan’s excellence was routine on both ends of the court.

If a youngster starts an argument in a bar about the comparative excellence of LeBron James over Michael Jordan, you have two choices, ignore him as an idiot not worth your time, or dominate him with a flurry of numbers and attitude that leaves him dazed.

There is no debate.  There is no question.  Jordan was a singular talent who put his stack of chips on the table in every game.  No one ever got a competitive advantage on Jordan.  James is a great player who has shown an occasional willingness to quit.

Another difference is that the Jordan vs. Bird game of horse for McDonald’s was an infinitely smarter branding effort that this weirdness with LeBron working out alone, answering a call from Dr. Dre, and then puts him on hold for an undetermined period of time.  When he returns to the call, James says, “Talk to me.”  Other than Saul Goodman on “Breaking Bad”, who says that?

107 thoughts on “LeBron James vs. Michael Jordan in Finals – Not Even Close”