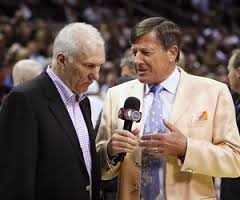 Gregg Popovich is an Indiana guy who coaches a style of basketball I love, so I should like him, and I would like to.  But he makes it impossible because he has no interest in treating people like human beings.

ESPN has worked hard during the NBA Finals trying to make him appear entertaining by building bits where his abrupt and incomplete answers are punchlines, but there is no denying that Popovich is an ass.

Let me define “ass”, so there is no confusion.  An “ass” is a person in power who treats people poorly because it’s unimportant to him to do otherwise.  Success is all that matters, and the people who cannot provide assistance toward achievement are discarded or ignored.

In Popovich’s world, people represent distraction.  Questions from the media are annoyances.  As a coach, he wins, so the media helps by turning his abrasive personality into entertaining bits.  The other option is to show Popovich as the boor that he is.

Popovich has been the head coach of the San Antonio Spurs for 16 full seasons and part of a 17th, has never lost one of four four NBA Finals series, never missed the playoffs in a full season, and has never failed to win 50 games while playing an 82-game schedule.  His overall record is 905-423, and he has been the NBA coach of the year twice.  That’s a track record that portrays Popovich as a great coach, and helps justify his behavior as part of that successful leadership recipe.

That success has been possible because the Spurs have always had great players, and that makes Popovich a great executive too, as he runs the franchise.

Popovich might be the best coach in the NBA, and that’s his job.  He’s not paid to be gracious and smile all the time, and that’s a good thing for him.  He would be a pauper.

There was a time when Bob Knight was celebrated for being cantankerous, and then when the wins came less frequently, the media couldn’t wait to help bring down the curtain on his career at Indiana.

Popovich appears to be less manic than Knight, and much less likely to throttle players by the throat, but by being a jerk – which he is in the halls of the Spurs offices as well as to the media, according to people who’ve worked there – he makes himself someone whose failure will please most fans outside of San Antonio.

I’m a little conflicted about Popovich (by the way, can ordinary folks stop referring to Popovich as “Pop”?  It’s way too familiar for a stranger) because a few years ago I would have been a big supporter of this caustic banter – or lack of banter – with the media.  The media has a haughtiness that can be every bit as annoying as anything Popovich might do.

I’ve had moments when I treated people with less respect than they might have been due for the sake of a laugh.  Back in the day, that was the core trait of my personality, but oddly, being a nice guy requires less effort and is more rewarding, so I choose not to indulge my caustic side.

Being nice isn’t a job requirement, but it makes work no more difficult to smile, take an interest in people’s lives, and treat almost everyone with respect.

There used to be a great sign in every Wendy’s restaurant.  It had a picture of Dave Thomas with a quote, “Just be nice.”  Popovich couldn’t work at a Wendy’s.

Conversely, being a dick doesn’t prevent anyone from being a success, and some people just don’t give a damn how they are perceived as long as they win.

People who find a way to succeed while also being a pleasant human being are far more interesting than those who treat others with indifference or worse.

That makes Popovich a member of an unfortunate club who will win, but never use that success to enhance the human condition.  That’s not his job, but it is his (and ours) responsibility as members of a society.

Let’s stop treating this cantankerous oaf like an amusing sideshow.  We should expect more of leaders.

10 thoughts on “Hey Gregg Popovich – You’re a Great Coach, But Stop Being an Ass”