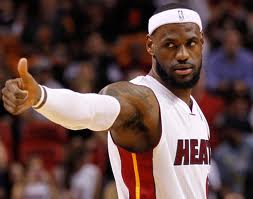 Yep, last night was a thumbs-up for LeBron James.

The Miami Heat are like Moby Dick and the rest of the NBA is Ahab.  Everytime the league thinks they have Lebron and company on the hook, the Heat remind you they aren’t some ordinary trout.

The 33 points and 11 rebound from James weren’t any kind of offensive explosion, but they were enough to cripple the will of the San Antonio Spurs – a team that has historically been exceptional at maintaining enough pressure on the throats of NBA Finals opponents to eventually choke them out.

That end could still come for the Heat, but as happened again and again with the Indiana Pacers in the Eastern Conference finals, the Heat are very good at escaping from the grips of their rivals.

The infuriating thing about the Heat is that throughout this offseason it has been impossible to tell whether the Heat are a good team in ascension or a briefly great team in decline.  They are incapable of not letting their opponents off the hook too.

Is the real Lebron the guy who scored a total of 49 points in the first two games of the finals, or is he this splendid beast who destroyed the Spurs last night and guaranteed a return to South Beach?

And what about Dwyane Wade.  Maybe more than LeBron, Wade made the Spurs pay last night.  After looking either old and tired, or occasionally old and craft enough to contribute, Wade hung 32 points on San Antonio last night on 14-25 shooting.

He got to the rim, hit some midrange shots, and while not resembling the guy who scored 22 in the first six minutes against the Pacers two years ago in Indy, he was unquestionably a player who could be a big contributor for a championship team.

Even the previously soft and woeful Chris Bosh, who has been the unpopular Shemp to LeBron and Dwyane’s still funny Moe and Curly, dropped 20 and 13 on a night when the Heat shot an awesome 52.9% from the field.

That kind of efficiency was the calling card of the team that won 46-49 before the series with the Pacers began.

The Heat are a machine when motivated.  When they aren’t, they can be had.  That’s the difference between a good team and a great team.  LeBron’s protestation prior to the Pacers series about the Heat being a “great” team will ring hollow regardless of whether they finish the deal against the Spurs, whose Big Three might just be too damn old to vanquish a good team with a great player. after playing 100 games in seven months.

The Spurs looked old last night.  How many times did the ball go down low to future first ballot hall of famer Tim Duncan only to have him decide to kick the ball out rather than finish?  And for the love of Eva Peron, where the hell has Manu Ginobli’s game been.  Last night, Manu was 1-5 from the field for five points.  He’s making Bosh look like a scoring machine by comparison.

Since a pedestrian 13 points in game one on 4-11 shooting, Manu has tallied, five, seven, and five points on a combined 6-18 from the field.  He’s going to turn 36 next month, and the NBA may have seen the last of the amazing Argentinian who has always been a master at finding a way to get the ball in the bucket.

The Spurs are hardly dead, but they sure looked like a team unlikely to beat the Heat two-of-three with the final two in Miami.

If LeBron wants us to see him and his team as great, they need to bring the Heat every night.  They haven’t appeared capable of that over the last 11 games in which they have been 6-5.  But they are good enough to win this series and a second consecutive championship.