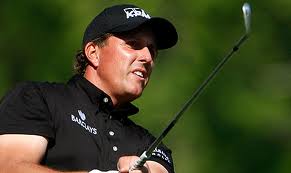 Phil Mickelson has everything figured out, but winning a U.S. Open continues to elude him.  He has finished second six times since 1999, but those losses won’t define him.

Jack Nicklaus holds the record for winning majors with 18, but he was also the runner up in 19 more.  Nicklaus is known as the best winner in golf, but he has also been defined by his response to losing.  He was always gracious, seemingly more pleased by the victories of his rivals than with his own triumphs.

Despite his six green jackets, Nicklaus is as well known for being a great dad and gentleman, and despite Mickelson’s struggles to win his country’s championship, his legacy will be more similar to Nicklaus’s than the most logical heir apparent – Tiger Woods.

We are all well aware of Mickelson’s decision to attend his daughter’s eighth grade graduation and fly back to Philadelphia two hours prior to his tee time for the opening round.  That kind of family first perspective is nothing new for Mickelson, and it’s hard to know what trophies it might have cost him throughout his career.

One thing that is for sure is that the motivation to collect trophies will not rob his kids of a father’s love or presence.

What Nicklaus always knew, and Mickelson has shown again and again that he knows, is that the legacy that matters most is in the eyes and hearts of the kids who call him “Dad.”

Mickelson smiles a lot regardless of whether he wins or loses.  What a great lesson for his kids – and the rest of us to strive to succeed professionally and as parents.