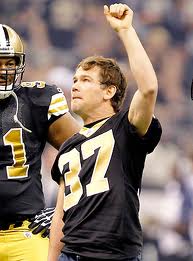 ALS victim Chris Gleason fights to maintain hope, and radio idiots who mocked him are looking for work.

Radio can do so much better than it currently does, and now it will because one more self-indulgent, small-minded show has been eliminated.

There are two types of sportstalk stations – those that cater to a sportscentric audience with unique information and perspective from hosts that love the games they cover, and the others that embrace childish antics that suit their sense of humor but rarely find an audience.

790 the Zone in Atlanta has always been a station that was dominated by morning talent that cared more about what made them giggle than what might engage sports fans.  And finally, yesterday the low brow humor that has been the hallmark of “Mayhem in the AM” with Steak Shapiro, Chris Dimino, and Nick Cellini caught up with them.

Mayhem did a bit where Cellini portrayed former New Orleans Saint Steve Gleason, who is currently in the end stages of ALS (Lou Gehrig’s Disease).  Cellini spoke as though he was using a computerized voice, and that was about as much thought the three talent put into what they were doing.

Cellini went completely off the rails as he started to tell knock-knock jokes that conveyed Gleason’s hope for death.  The other talent smelled the abyss into which their idiocy was taking them.

The three hosts were immediately suspended, and later in the day – after consultation with attorneys and human resources type folks, as is always the case – they were fired.  VP/GM Rick Mack released the following statement:

“We deeply regret the offensive programming that aired this morning on “Mayhem In The AM” on 790 The Zone, related to former New Orleans Saints player Steve Gleason and his battle with ALS. We suspended the three individuals involved immediately following their comments and have since terminated their employment. 790 The Zone, our owners, sponsors and partners in no way endorse or support this kind of content. We sincerely apologize to Mr. Gleason, his family and all those touched by ALS.”

Speaking into a microphone is a responsibility.  Hosts can either enlighten or damage with their choice of words and direction of their shows.  They have an opportunity to entertain and inspire, or peel back the curtain on the desperation and bitterness that cause small-minded people to titter.

I’ve listened to these guys on occasion over the past two years, and this lapse of judgment is no surprise.

Two really bad things can happen to a radio show – the talent start to believe the positive comments from loving listeners, and the talent become indifferent to the process of preparation that gives a show the heft that makes it worthwhile for those not in love with the personality of the show.  Both seem to happen to hosts simultaneously, and both have been a major problem with this show for years.  Self-indulgence is a miserable trait for a radio host, and it was the defining trait for this show.

The Mayhem group being fired should remind talent everywhere to stay humble and work hard.  It should drive home the understanding that the studio is not a sports bar, and that those regrettable things said after 14 beers to make friends wince make for terrible radio.

Here is a good rule for acceptable mockery.  Victims need to be on top, not at the bottom.  Making fun of people who are living large is funny.  ALS victims deserve our respect as they deal with tiny erosions of their physical abilities until all are gone.  It’s an unimaginable test of will and courage.  Mocking them is Steak Shapiro, Chris Dimino, and Cellini did is weak and puny.

I wouldn’t wish ALS on anyone, but firing these clowns just doesn’t seem a serious enough consequence to enlighten them.