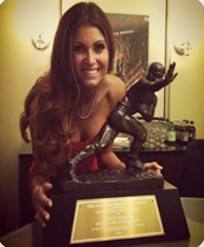 Yeah, your life sucks, Johnny. Sara Savage holding your Heisman must be a bitter pill to swallow every morning.

Is there anything less attractive than someone who bitches and moans about the rigors and responsibilities of massive success?

People who go to Vegas, win big, and complain about the taxes are among the most grotesque scourges on the planet.  Lotto winners who long for the days prior to winning should give all their cash to strangers if they can’t enjoy it.

America found out late Friday and early Saturday that Johnny Manziel is just such an idiot.

Twitter at night is a dangerous place for a college quarterback, and Texas A&M’s Johnny Football found that out Saturday.  His two tweets:

The first tweet is the kind of juvenile overreaction to jealous drunks shrieking nonsense to a quarterback with the world by the balls – or maybe to his girlfriend.  It’s shortsighted and silly – the kind of thing a 20 1/2 year old might think, and with Twitter being so convenient and available, maybe Manziel was compelled to yell it to everyone.

I’m cool with that one.

The second it the train wreck for me.  It reeks of the hubris and poor understanding of life so often demonstrated by those who mistake glee for pain, reward for penalty, and repeated thrills of a lifetime for the mundane.

If he’s tired of being the quarterback of Texas A&M and all that goes with it, stop.  That position didn’t come as the result of a judge’s sentence.  As I understand it, all he has to do is decide not to – as I did at the same age when I no longer wanted to cook pizzas.

He can refuse to throw out the first pitch in San Diego and Arlington, Texas.  He can refuse the offer of courtside seats to a Houston Rockets game.

Manziel can crate that Heisman Trophy, and put it in a storage locker.  Break up with model girlfriend Sara Savage, who if presented with an opportunity to date everyday college student Johnny Manziel, would say, “Um, who?  Yeah, I’ll pass.”

What he should do is grow the hell up and realize that life isn’t a damn carnival that was created for his amusement without potholes.

His tweets try to educate us that everyone has a bad day, and that his life isn’t all surprises and delight. We already know that because we are adults who sweat, revel, and answer challenges too.

Manziel’s life is different, and if that’s a source of resentment for him, he should man up and change his channel.

If he wants joy, Manziel should open his eyes at times when he’s not in front a mirror.  Take a look around.  See what real life is for others.  Hold on to your own shoes, and start trying on those belonging to less fortunate folks – a list of people that includes damn near everyone on the planet.

Grow up and stop whining.  At least stop doing it so publicly.